The tests, which were conducted in March, were part of the initial operational test and evaluation for the air defense system with a third slated to take place in the fall.

In the first test, the system intercepted a high-speed tactical ballistic missile target while connecting to the Joint Tactical Ground Station (JTAGS), which delivered space-based sensor data to provide early warning of the missile launch, Northrop said in a statement.

Previously, at Project Convergence 21, the latest in a series of yearly exercises in which the Army tests concepts and technologies related to joint all-domain command and control, the ground station sent a simulated missile threat warning, according to a spokesperson. The first of the more recent tests at White Sands saw a real connection to JTAGS.

Joint all-domain command and control (JADC2) is the Pentagon’s new concept which seeks to more seamlessly connect sensors and shooters to allow for faster decision-making on the battlefield.

“We continue to demonstrate our architecture’s power to leverage information from every domain, delivering unprecedented situational awareness and increased time and options to warfighters,” said Christine Harbison, vice president and general manager for combat systems and mission readiness at Northrop Grumman. “IBCS’s maturity and ability to connect legacy systems significantly helps to expand their mission capability.” 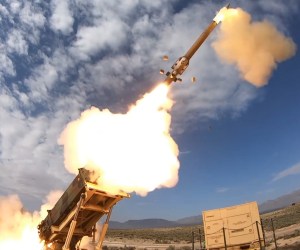