DXC Technology is now five months old, created after a merger of CSC and Hewlett-Packard Enterprise. The IT service company is positioned at one of the broadest pushes for federal technology modernization in recent memory.

Editor’s note: The transcript has been edited for clarity and length.

FedScoop: Can you talk about what it’s been like standing this enterprise up?

Dan Hushon: It’s exciting. We were really fortunate to have almost a full year to plan the integration. The problem was that we were actually competitors throughout that process. So as much as we had all of this time to plan, [it] allowed us to build a brand new company.

And doing that globally, that was a big challenge. So I would say the last six months really have been digging into the areas that were appropriately opaque over the year planning. And that comes down to everything from how are our customers really doing, what are they really trying to accomplish. How to find the compliment between the two companies to expose our clients to the best of both?

It comes down to how do we operate the company from an IT perspective? As much as that sounds silly right, we did inherit two of everything, in some cases three, four or five of everything.

So there’s still a lot of big hard, hairy problems to keep us busy for another year. But for me, it’s really been how do I get out to the clients. Fundamentally, it’s how do I take this strategy that we have put forward for the new company and really make it real with enough of our clients to demonstrate the scale effect of the company.

FS: IT has always been important, but it feels like it’s really having a moment, especially within government contracting. Can you talk about that and what it’s like to see the focus on modernization of this moment?

DH: Well, I think it really comes back down to the one key phrase, which is “I-T.” I think we used to talk about IT as systems before, and I think that was maybe appropriate when we had a lot of stovepiped businesses. But I think now what’s coming into focus is the “I” part, the information. What we’re finding is that information is what drives intelligence and drives knowledge and drives behavior and capability and productivity. How valuable is that information if it can be shared a little bit more broadly or combined with information you have for some novel product that’s a mix of the two, which allows both of us to move forward even faster?’ We saw this in the 9/11 Commission. We saw this in the shared services attempt by some of the organizations, we see this in information sharing in the commercial marketplace very, very aggressively. These kind of data malls are almost beginning to grow up around [the Internet of Things]. And so what we know is the combinatorial value of information is greater

I think one of the biggest challenges for IT is actually figuring out how to put information up front in every process and every business decision, in front of every employee to allow the productivity to really take hold. I think that’s mission-based productivity, and I think that’s citizen-based productivity. Everyone’s asking for the information to do their job better, to get to an outcome faster or to complete a mission with more effectiveness.

FS: I heard somebody say recently that data was the new oil. It’s just really the commodity that everybody has to capitalize on as long as you have the right tools.

If you looked at what Acxiom has with respect to best address, they’ve been tracking for 35 years how Americans have to move from house to house to house because they’ve been managing mailing lists. All of a sudden now Census can look at that data, in addition to the data they collect, and actually maybe draw some other solutions that are interesting.

I think that we will see an information economy, much like an oil economy, begin to emerge. What I’m really anxious to figure out is how the government begins to incent the information sharing on a cross-organizational boundary with substantially lower friction.

FS: Government is sort of in this push-and-pull between trying to move to the cloud but then also trying to maintain the legacy systems that are currently operating right now. What’s your take on government’s success at that?

DH: There are lots of challenges. I think at the end of the day, I’ve seen lots of legacy modernization programs fail. I think a lot of times they fail because those goals and modernization are not always aligned with success criteria. Sometimes those goals are merely to put them on to more modern platforms. And I’ve found that you can almost never make the commercial business case, a cost basis, of doing the move… I think we have to really recognize that, look, legacy systems really have two things in them that are very interesting. One of them is the information that they hold, and the other one is the business processes that they represent. I think we failed in [service-oriented architecture] because we tend to look at the business as a set of services.

I think we’re winning and succeeding this time in web services because we’ve recognized the web services are constructed around information. So where before we used to focus on the verb, now we’re focused on the noun. I think the noun is the key driver to the modernization of services, which is how to extract information with low frictions that can now be used by upstream processes. The aggregated services for citizens, whether you look at one agency or another, almost all of them are actually playing the role of fetching information from 16 to 18 disparate systems in the back office and presenting it in a unified way to a client.

FS: What does hybrid cloud offer as a solution for IT modernization?

DH: I actually think what hybrid cloud does is helps an enterprise and a government entity to manage its risk today. I think that there are still ambiguities with respect to information and how it can be shared and where it needs to be positioned, because of regulatory reasons or others that force you to hold that information away from a more public cloud. Now, FedRAMP is certainly beginning to take down those barriers for us, but I wouldn’t say that it’s all the way there.

I really do think that hybrid is going to play an important role, but I think we’re going to see the shift from hybrid from my data center to a hybrid from a co-location or a dual cloud, public or government cloud, strategy in the not too distant future.

FS: We’re waiting on a number of things in regard to IT modernization, like the MGT Act and the GSA Technology Fund. What would you say about the state of federal IT modernization right now?

DH: I think there is no question that the agencies themselves have to become substantially more involved in the digital processes that operate their agencies. I think some of them are more prepared than others to do so. I think once they begin to understand and characterize what the outcomes are, then it becomes much easier for the procurement groups and the servicing partners to come in and partner with them to deliver their business.

I still remain fairly concerned that we’ve got a very long and unprioritized wish list of things that are broken. And we don’t have enough people that are willing to take an incremental approach to improving them that gives them the ability to shift course, depending on complexity and value equations that they bring forward.

It may be able to be accomplished at the agency level, but even there I’m a little bit skeptical. I actually think that we need to start thinking more systemically about shared services within the government. Email services for the Department of Labor are not that much different from the email services from Commerce and each one of them really is operating kind of its own estate. I actually think there’s some low-hanging fruit with respect to some of the modern platforms that are available to re-platform business, which will create some of the savings and collaboration environments and tooling that are necessary to carry on that legacy system modernization behind it.

I’m really excited by the changes that I’m seeing in the leadership in government. I think that I’m seeing a set of government leaders who have a new reality, which is less of a “boil the ocean” and more of “let’s just take a step forward, even if we fail.” I think that continuous learning approach that I’m beginning to see emerge matches what I see in the best commercial entities, which is this recognition that you know if we try nothing then we don’t succeed at anything. 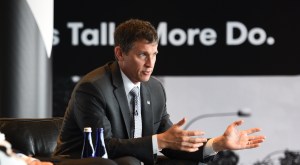