Worlds have collided — the Air Force is using its Advanced Battle Management System (ABMS) to build digital twins of its weapons systems, using one futuristic initiative to achieve the other.

ABMS is the Air Force’s stab at building an Internet of Things for war; a network-of-networks with data flowing from sensors to artificial intelligence-enabled systems for quick decision-making. Now, some of that data is feeding into a related key initiative: building digital twins.

Digital twins provide software-defined replicas of physical objects, taking into account the physical toll of operations and giving users a heads up on malfunctioning parts or needed repairs.

In the case of this project, called weaponONE, as data generated from weapons systems flows across ABMS’s architecture, it can feed those digital twin models, improving their accuracy and usefulness. The project is named in line with other parts of the ABMS family, like Cloud One, Platform One and so on.

Digital twins are a critical part of digital engineering where the 1s and 0s of code are tested in digital environments that mirror real-world conditions before physical prototypes are made. Both ABMS and digital engineering were top priorities for Will Roper, the recently departed head of acquisition, technology and logistics for the Air Force. He would seemingly levitate with excitement when speaking on both topics, saying that digital engineering was the closest thing to “magic” he had ever seen.

“I want to build everything this way,” he had said.

WeaponONE possesses multiple capabilities beyond just feeding data to digital twins, according to the Air Force Research Lab. Other capabilities include a software factory/DevSecOps pipeline for the development of simulations, on-board flight software and a government-owned cloud-based tech stack.

Having a government-owned tech stack — all of the technology systems from cloud storage to coding platforms — has been one of the sticking points for perfecting digital engineering. Roper said he wanted private companies to use a government tech stack that uses Cloud One and Platform One offerings like weaponONE does.

The Air Force’s recent breakthrough with weaponOne also gives more hope to ABMS’s uncertain future. Congress has looked at the program skeptically, asking for more strategy and detail on the acquisition process. It’s unclear how the Biden administration will work with the program that is now housed in the service’s Rapid Capability Office.

“This demonstration is just the first of many that will come as we move the weapons enterprise into an era of digital engineering, accelerating weapons development and improvement at the speed of relevance,” said Craig Ewing, senior scientist for AFRL’s weapons modeling and simulation directorate. 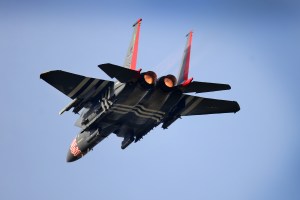