An Army Futures Command component tasked with driving research and engineering of high-tech weapons formally agreed to collaborate with a growing consortium of nearly 1,000 companies and universities to advance armaments development.

The initial focus will be on making integrated circuit chips customized for tri-service munitions.

Cooperative research and development agreements (CRADAs) are vehicles that enable federal entities to combine resources and engage in R&D with non-government institutions to unlock breakthroughs around topics of shared interest. Such agreements aren’t new, but a CRADA signed this week between the Army Combat Capabilities Development Command (CCDC) Armaments Center and the National Armaments Consortium (NAC) has multiple elements that make it unique.

“We sat down with [Army officials from the CCDC Armaments Center at their headquarters] in Picatinny Arsenal, New Jersey, with their technology transfer office. We’ve done some CRADAs in the past, but as we were brainstorming, we thought, ‘What if we could create a master CRADA?’” NAC Executive Director Charlie Zisette told FedScoop in an interview on Friday.

CRADAs offer a variety of benefits for government, industry and academic organizations involved, like access to laboratory facilities and equipment, and flexible intellectual property and licensing options to push forward innovation. But Zisette noted one challenge associated with these agreements is that “they are a legal document — even though no money is exchanged, it is a contractually binding agreement, if you will. And if you’re a nontraditional [contractor], and you’ve never done anything like this,” they can be difficult to navigate.

“What we did as a consortium is we went and hammered out all of the terms and conditions, through our contracts and our legal [resources], through the Army’s contracts and their legal, and created a base agreement that would ensure to protect all of our members as well as the government. That kind of sets the stage for doing all that hard work upfront,” he explained.

This newly signed “master” CRADA allows for all of NAC’s more than 970 member organizations — of which more than 80% are nontraditional defense contractors and academic institutions — to participate in different statements of work, or “annexes,” anticipated to be released by the CCDC Armaments Center.

The way Zisette puts it, each impending annex can be thought of as an addendum to the CRADA. Essentially, the plan is that when the Department of Defense has a fresh armaments-related problem statement down the line, the consortium can quickly send it out to about 4,500 people who are on its list of almost 1,000 members.

While CRADAs are often between one specific government laboratory and non-governmental organization, another notable aspect of this agreement, according to Zisette, is that other Pentagon-affiliated laboratories besides the CCDC can sign on. And a Navy component already has.

“Now, it’s kind of a pilot, right? Because the Army has never done this, and so we all agreed — let’s get it started,” Zisette said. “We’ll take this as our first thing, and if this works, then anybody can use this CRADA.”

Under the first annex of this master agreement, the CCDC Armaments Center is set to work with the Naval Air Warfare Center Weapons Division and a number of NAC members to develop and refine an application-specific integrated circuit (ASIC) that is broadly compatible with tri-service munitions.

Due to the sensitive nature of the topic, Zisette noted that he couldn’t go into great detail about the technology the participants aim to innovate. But, speaking generally, he offered some context.

“Smart weapons are critical to what we do, right, and part of being smart is not just maybe in guidance and control, or GPS and navigation — but it’s also in knowing exactly what my target is, and when and how I need to put effects on the target,” Zisette said.

He brought up a variety of conflict scenarios, like needing to “take a group of vehicles out, versus I have a hardened and deeply buried target where I need to go all the way into the ground.”

This envisioned ASIC, according to Zisette, “becomes the computer chip or the computer set that allows us to have the intelligence onboard to address multiple and complex targets, and allows us to do it right the first time, every time.”

He added: “And that’s really important because what we don’t want to do is create an individual munition for every single thing we’ve got to do.”

Those collaborating ultimately intend to help pave the way for versatile and smart weapons.

“Since we have this technology, in terms of computational capability and integrated circuitry, we now can have that intelligence onboard and we can allow that intelligence to make those decisions, obviously, through our programming and communications, with the weapon. And that is hugely powerful,” Zisette said.

Verified NAC members interact via a secure common platform. The consortium is accepting new members interested in cooperating for this and potential future projects. Barriers to entry are pretty low, Zisette noted, but it is restricted to only U.S. companies.

Although it’s tough to put timelines on innovation, Zisette said the technology is fairly well understood, so he’s optimistic that outcomes from the CRADA will be seen in the next year or so.

“We all know exactly all of the inputs that the Army in this case needs to have, and the Navy, so that they can start to shape their basic architecture and the requirements, and be able then to take that as a package and come back out to industry and say, ‘Okay, we’re ready for primetime. Let’s go do some real scale-up, prototyping and discovery from there,’” Zisette said. “I wish things were like super fast, but we are dealing with weapon systems.” 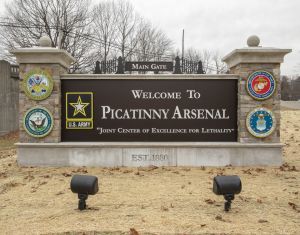