The incoming Biden administration should identify which recent information technology innovations are worth scaling across government and have the General Services Administration oversee operations and implementation, according to a member of the president-elect’s transition team.

Federal systems currently incentivize the old, waterfall model where a project plan and budget are delivered up front and procurements and hiring take forever — causing agencies to miss out on cutting-edge technology and top talent, Dunkin told FedScoop.

“We think that GSA is the one to really look at how we can more effectively deliver new technologies and what we can do to streamline the work that people are doing,” she said. In recent years, the agency has taken on technology services as part of its mission in addition to its more traditional roles such as managing federal real estate.

Dunkin and Godbout credit the Trump administration with creating the Office of American Innovation to advance technology management which “facilitate progress in multiple federal departments and agencies,” but little else.

Government has seen a lot of “small-scale innovation,” where the U.S. Digital Service or 18F modernizes IT within one or two projects at an agency, but those processes aren’t adopted across the entire agency, Dunkin said.

One exception is the Air Force Software Factories effort, which provides DevSecOps-managed services throughout the Department of Defense and has shown early promise that might be worth expanding governmentwide, the report says.

“Scaling all of these things, so they’re across the full enterprise and not just experiments, that’s the hurdle,” Godbout said. “And it’s a huge, Herculean task.”

The Biden administration will first need to fill widespread IT vacancies at agencies, likely with a surge of Obama-era people returning to government. Dunkin and Godbout recommend establishing a Presidential Leadership Fellowship, where about 2,000 mid- to late-career professionals serve four-year tours overseeing IT modernization at agencies.

“Workforce retraining is going to become standard, so I kind of disagree with the prefix ‘re-,'” Godbout said. “What you’re going to see standardized in the future is a constant state of continuous improvement of skill sets and modernizing workforces.”

Apprenticeship programs will be backed by artificial intelligence and other tools that enhance on-the-job learning, he added.

Dunkin and Godbout further recommend creating an Agency Transformation Playbook to scale innovations across government that agencies previously developed with the aid of the Digital Services Playbook.

“There are methodologies, there are practices to scaling that are tried and true,” Godbout said.

The final recommendation is to establish a much-needed Transformation Advisory Board comprised of high-level leadership from all parts of government. Presidents coming and going every four to eight years and Congress changing every two years is “incredibly disruptive” to operational transformation, Godbout said.

The TAB would be modeled after the Defense Innovation Board with senior executives supporting a long-term operational strategy running, say, 10 years.

“We just didn’t think to do it on the civilian side, and now it’s time to take that idea and create a group of people who will survive across administrations,” Dunkin said. “So we don’t lose track of things and guide change at the policy level across government.”

Other IT modernization strategies Godbout would like to see scaled include the use of shared services, move away from hardware-based infrastructure, human-centered design, and agile delivery.

Godbout and Dunkin proposed their IT modernization recommendations as part of the Day One Project policy accelerator. Dunkin being on Biden’s transition team will likely add weight to their suggestions, though only time will tell if they’re ultimately accepted by the Biden administration.

“All I can say is I certainly hope that people are paying attention, but I don’t know,” Dunkin said. “We’ll see what happens.” 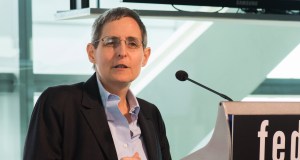 GSA should have key role in governmentwide IT adoption under Biden, report says