The Department of Homeland Security wants industry to develop video analytics that can detect threats caught on cameras at schools and transit systems in real time, which runs the risk of blanket surveillance, according to an American Civil Liberties Union expert.

“Right now we have a lot of cameras on us, but we basically don’t worry about them most of the time because there’s an implicit understanding nobody’s really watching those cameras,” Jay Stanley, senior policy analyst with the ACLU Speech, Privacy and Technology Project, told FedScoop. “No one is going to pay a million security guards to watch every camera feed, but with AI you can do that.”

The solicitation defines soft targets as “locations that are easily accessible to large numbers of people and that have limited security or protective measures in place making them vulnerable to attack” like malls or stadiums. What types of threats DHS S&T hopes to mitigate, other than “attacks” and “crime,” aren’t made clear, but its Surface Transportation Explosives Threat Detection Program supported the development of the Forensic Video Exploitation and Analysis (FOVEA) tool used by local agencies like the Washington Metropolitan Area Transit Authority to identify crimes that have already occurred on video.

WMATA receives about 20 to 30 requests per day, including those from federal agencies, for FOVEA video analysis to assist in criminal and noncriminal cases. Developed by the Massachusetts Institute of Technology Lincoln Laboratory, the tool is set up in about 20 WMATA metro stations.

FOVEA lets security personnel tag people to items they leave behind and reconstruct their paths across multiple camera feeds, which is helpful given the amount of bomb threats DHS alerts WMATA to, said Bryan Doucette, coordinator of WMATA’s Digital Video Evidence Unit, during DHS S&T’s virtual industry day Tuesday. The tool has also been used to track abducted children in amber alert emergencies.

Still no commercial product allows these tasks to be performed in real time, and DHS S&T wants to be “proactive” with its research and development efforts, said Ali Fadel, Physical Security program manager.

“It is impossible for first responders to be everywhere at all times,” Fadel said, in the original announcement. “S&T is therefore creating and supporting the development of tools that serve as force-multipliers.”

Unfortunately the force being multiplied could be the “chilling effect” on people’s normal behavior, for fear of triggering an autonomous security alert, Stanley said.

While he didn’t rule out the development of “reasonable” tools in very specific circumstances, Stanley said autonomous video analytics could change what it means to be in public in the U.S. With terrorist attacks — DHS’s usual reason for developing security technologies — exceedingly rare, the analytics could be applied to “far more prosaic acts of wrongdoing,” he added.

DHS S&T didn’t comment prior to publication, but a spokesperson did point out the solicitation requires proposed solutions ensure privacy and personally identifiable information residing in information systems be protected. Only personal information needed to fulfill tasks is to be disclosed or accessed by authorized personnel, and proposed solutions must provide “robust” audit trails verifying both and secure data during collection, transmission and storage, according to the solicitation.

The agency isn’t considering facial recognition analytics as part of the solicitation and won’t be purchasing any systems that come out of it, though DHS does provide funding for end users like WMATA to procure them.

“The question we have to ask society is whether we want to allow AI tools to be used to watch everybody all the time because some people might be doing something wrong someplace, somewhere,” Stanley said. “That could justify pretty much watching everything.” 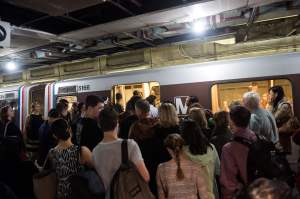