The Department of Defense’s efforts to become a more data-centric organization are accelerating under the new administration, the department’s top data officer told FedScoop.

Dave Spirk, who became DOD chief data officer last June, said he’s planning to release documents that will help define the ways the military should use data and implement a strategy around it.

Spirk said he has support from the most senior leaders in the DOD, which is helping to push the department toward having data available for decision-makers in the Pentagon and troops in the field.

“With the direct support of Deputy Secretary of Defense Dr. Kathleen Hicks and her senior support team, not only are we on the path, but the expectation is we will accelerate,” Spirk said Thursday during day two of the IT Modernization Summit presented by FedScoop.

Spirk said new “data decrees” — documents that will help define the ways the department will use its data — are awaiting approval from Hicks. The decrees are a part of implementing the department’s broad strategy to improve data access and “data readiness” across the military, Spirk said.

One of Spirk’s major focuses is eliminating the idea the DOD will have a “common data standard” where there is a one-size-fits-all approach to what type of data the department uses. Instead, he is working to make a federated data ecosystem where data officials can use an “open-data-standard data architecture” that uses technology and practices to enable interoperability between the plethora of data use-cases specific to different mission areas.

Spirk said one of the initial steps he and his team are pushing is to create a “federated data catalog.” Making that a reality will rely on education, training and technology to ensure everyone from military departments to combatant commands have the flexible tools to use data in unique ways but remain interoperable with the rest of the force.

“Trying to just have one to rule them all would be a fool’s errand,” he said. Organizations should have the expectation that they all will catalog their data, he added.

On Friday at the Aspen Security Forum, Hicks endorsed much of what Spirk had to say on the importance of data and the need to put resources behind implementing the data strategy.

Hicks said the DOD’s efforts to create an enterprise cloud system, like what it is hoping to do with the Joint Enterprise Defense Infrastructure (JEDI) cloud contract, is “vital” in the ability to use data more effectively.

But how the department will get to that cloud state is still up in the air as the legal battle surrounding JEDI continues. A judge issued a sealed decision Wednesday allowing Amazon’s claims of malfeasance on the $10 billion contract to be heard, further extending the drawn-out court case over Microsoft’s win in 2019.

“We are going to have to assess where we are…and determine what the best path forward is,” she said on the JEDI ruling. 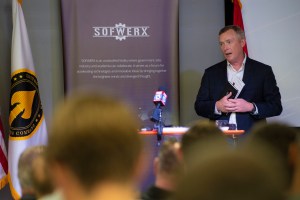