The top official working on artificial intelligence ethics within the Department of Defense has left her post, she announced on LinkedIn.

Alka Patel worked as the first “chief of responsible AI” at the Joint AI Center for 20 months, joining just after the DOD adopted its AI ethics principles in February 2020 and concentrating her efforts on developing draft guidance for the implementation of those principles. That guidance, however, has yet to be finalized.

“As a child of immigrant parents, I would have never imagined that I would have the privilege and honor of serving in our federal government, let alone find myself at the United States Department of Defense, and in a role as critical as ensuring that we build and use our technologies in a responsible manner,” she wrote in a farewell note.

In a previous interview with FedScoop, she described her view of AI ethics as being a whole-of-department responsibility.

“I think about how do we have everyone think about ethics across the organization, and not think perhaps it is just the technologist’s job to address it,” Patel said in September 2020. “Frankly, it is all part of our jobs.”

Much of Patel’s work was focused on trying to turn the broad principles the DOD adopted in February 2020 into actionable work. She also lead efforts to create a “responsible AI champions” program that put workers across the department through special training on AI ethics.

Before joining the DOD, Patel worked at the Montreal AI Ethics Institute and in various roles at Carnegie Mellon University. She holds both a law degree and a master’s degree in business administration.

It’s unclear where Patel is headed next, but she referenced moving back to Pittsburgh.

“There is still much more to do, but over the last 20 months, it’s been my responsibility and privilege to elevate the dialogue on Responsible AI,” she wrote. 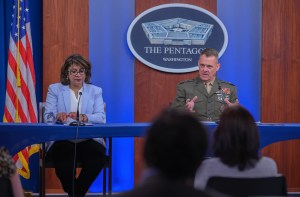