The federal government’s efforts to manage and update its IT have evolved over the past 20 years, from Clinger-Cohen to the Modernizing Government Technology Act, but Kay Ely said she’s rarely seen the enterprisewide emphasis placed currently placed on modernization.

Ely, the assistant commissioner for the General Services Administration’s Office of Information Technology Category, said at FedScoop’s IT Modernization Summit that the combination of legislation, executive orders and the sprints outlined the White House’s  recent IT modernization report represent concerted effort to modernize the government’s tech infrastructure.

“I’ve been doing this for a really long time,”she said. “What’s in [the president’s IT modernization report] is, ‘You are going to do this in 30 days, you are going to do in 60 days.’ That’s unprecedented. We’ve never had that kind of clear road map of what needs to get done.”

Ely added that with the MGT Act becoming law last December, both Capitol Hill and the White House are aligned on IT in a way that is rare in Washington.

“We have both ends of Pennsylvania Avenue to help us as a federal government do the modernization work that we need to do,” she said. “So from my perspective, never in my career have I seen the stars more aligned than they are now.”

But to fuel that alignment, it will also take innovation in the acquisition process as well. Ely said that GSA needs a new emphasis on performance-based acquisition practices that shift from ironclad procurement requirements and puts more of a focus on the ultimate objective to promote more collaboration with industry.

“We really have to get into the business of, ‘Here’s our objective, here’s what we are trying to achieve.’ Start with success in mind; focus on the what, not the how,” she said.

But with the opportunity presented by a confluence of legislative and executive action, Ely said the simple message for federal leaders was clear.

“IT modernization: If not now, never.” 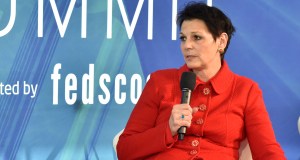