While mass-produced quantum computers won’t be on store shelves anytime soon, 2018 could be the year companies hit quantum supremacy — the theoretical threshold where quantum computers have the processing power to solve complex mathematical problems that conventional computers cannot.

“I think we can say with a very high degree of confidence that era of quantum computing has officially arrived,” said Scott Totzke, CEO of ISARA Corporation, a Canadian quantum security company. “We see a lot of commercialization efforts starting to manifest from IBM, Google, from the work that Microsoft is doing.”

With some estimates placing quantum supremacy’s threshold at a 50-qubit processing, Intel introduced a 49-qubit test chip on Jan. 8 at the 2018 Consumer Electronics Show in Las Vegas. That development, coupled with ongoing development from other commercial entities, has Totske confident that quantum supremacy will be reached in the first quarter of this year.

“We’ll see somebody — it could be Google, could be Intel or some other player — that has a quantum computer that more capable than the most sophisticated supercomputer we can build,” he said. “We’ll solve some very academic problems, optimization problems, that we just can’t solve on a computer.”

While that technology will still be limited, it could represent a sea-change in quantum computing development that moves it from science fiction to reality, particularly in the federal government, which in many places bas been an early investor in the technology.

Much of quantum computing federal support comes in the forms of grants from major research agencies, looking for major breakthroughs in quantum computing that the nation can leverage for economic and scientific gain. The Energy Department last November announced a call for proposals from researchers on quantum computing.

And given the expectations for quantum computers to eventually be able to break most modern cryptography, the National Institute of Standards and Technology is currently evaluating quantum-resistant algorithms to help provide standards for quantum-safe encoding that can operate on classic computer systems.

“Our intelligence community customers have many complex problems that tax classical computing architectures,” Robert Ames,  then-vice president in charge of information and communication technologies at In-Q-Tel, said in 2012. “We believe our customers can benefit from the promise of quantum computing, and this investment in D-Wave is a first step in that direction.”

Quantum computing should should also play more of a foundational role in the greater emerging tech adoption in the federal government as it gives agencies more power to support enhanced tools, like machine learning, big data analytics, quantum cryptography and more. 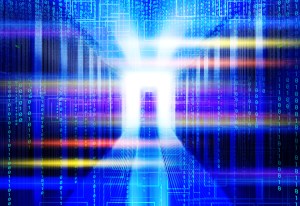