The Government Accountability Office has denied a bid protest brought by Deloitte and ManTech over the award of a $2 billion defense health IT contract.

The two federal contractors earlier this year filed a complaint following the award of an IT services and support contract to Peraton subsidiary Perspecta, which included delivery of a single electronic health record system for the Department of Defense.

In August last year, the Defense Health Agency (DHA) awarded the contract for the transformation and consolidation of health IT services, which is worth up to $2 billion and has a 10-year horizon.

Deloitte and ManTech argued in their complaints that the award was tainted because of a family relationship between a federal IT consultant assisting the DOD during the procurement and an employee at one of the bidders.

The plaintiffs also said in their argument to the GAO that DHA failed to take into account Peraton’s merger with winning vendor, Perspecta, during the course of the solicitation process.

However, in its decision, GAO found that conflict of interest concerns raised by the two companies were unfounded, and that the watchdog had sufficiently investigated the impact of the Perspecta merger.

In addition, the watchdog said it had investigated the impact of the of Peraton’s acquisition of Perspecta and determined that it would have no meaningful effect on the solicitation.

“In sum, we find that the [DOD] contracting officer reasonably concluded that there were no actual personal or organizational conflicts of interest present in DHA’s conduct of the procurement, and the protesters’ arguments lack the hard facts required for our office to sustain the protest,” GAO said in its decision.

GAO added: “[W]e find the contracting officer’s analysis of the impact of Peraton’s acquisition of Perspecta Inc. on the PES quotation considered all of the relevant allegations raised by the protesters, and reasonably concluded that there was no basis to find PES ineligible for the BPA. Accordingly, we deny these allegations.”

Perspecta is the principal contractor on the firm firm-fixed-price blanket purchase agreement. It will carry out the contract with help from Capgemini Government Solutions as part of a contractor teaming arrangement.

Under terms of the solicitation, the federal contactors will assist DHA with the implementation of an integrated system of affordable and quality health services for Military Health System beneficiaries.

DOD has transitioned the authority, direction and control of all Department of Defense military treatment facilities to DHA, which includes all health IT services and support capabilities.

Deloitte declined to comment on the bid protest outcome. ManTech did not immediately respond to a request for comment. 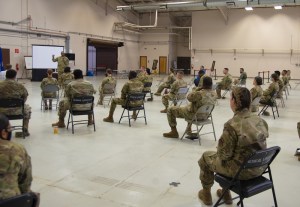