Emily Murphy, head of the General Services Administration, has asked for the resignation of all of the agency’s political appointees by Jan. 20.

Murphy’s request came late Wednesday and she shared the news with all GSA employees during a virtual town hall Thursday, in which she “stated that she was appalled and deeply saddened by the violence that occurred yesterday at the nation’s Capitol,” according to a statement from a GSA spokesperson.

Murphy’s comments refer to the violent mob that entered the U.S. Capitol the day prior at the incitement of President Trump.

“GSA senior leadership will do everything possible to ensure GSA peacefully transitions to the Biden Administration,” the spokesperson said, adding that the request was made to “demonstrate GSA’s commitment to a peaceful transition of power.” Murphy was joined by Deputy Administrator Allison Brigati, Chief of Staff Rob Borden, and General Counsel Trent Benishek in making the request.

They asked political appointees to issue their resignations by Friday and to be effective no later than Jan. 20, the upcoming Inauguration Day for President-elect Joe Biden.

Some senior members of Trump’s White House staff and Cabinet members have resigned after the events Wednesday, which left four dead.

GSA has several roles to play in the presidential transition over the next few weeks, including support for the inauguration.

Murphy was notably connected to Trump’s disputes of the November presidential election results, refusing early on to acknowledge Biden’s win and allow for transition resources housed in GSA to be made available for the incoming administration.

This story is developing and will be updated when new information is available. 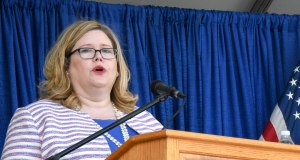