The government’s ongoing quantum projects tend to focus on esoteric fields and theories like black hole edge conditions at NASA and high-energy physics at the Department of Energy, but that doesn’t help the Department of Commerce address more pressing issues like infrastructure and climate change, Christopher Savoie, CEO of Zapata Computing, said during Center for Data Innovation event.

Moonshot-type projects are great in intention, often leading to unintended breakthrough developments, Savoie said, like how the Apollo program aimed to send a semiconductor-based computer to the moon, creating Silicon Valley in the process. But lately foreign adversaries like China have been more successful at getting its industrial and academic bases to work on practical projects.

DOE provides researchers access to its testbeds — through the Quantum User Expansion for Science and Technology (QUEST) program — and its National Quantum Information Science (QIS) Research Centers conduct research and development. But generally, the goal is to address a problem that industry can’t, before gracefully bowing out to allow the industry to become viable, said Rima Oueid, commercialization executive at the Office of Technology Transitions within DOE.

That doesn’t mean DOE can’t do more practical work in the program space though.

“Within DOE there is a cohort that is looking at some of the more viable use cases, some of the shorter-term wins that are possible that fit within our mission space,” Oueid said.

With quantum likely in a hybrid state with classic computational computing for another eight years, breakthroughs are still being made in drug discovery, autonomous vehicles communicating with each other and allocating resources for emergency response, said Allison Schwartz, global government relations and public affairs lead at D-Wave Systems.

Industry needs to be better about keeping government researchers abreast of practical applications, and researchers must similarly improve sharing the results of their work with the private sector, Merzbacher said.

“The different parts of the ecosystem, the innovation supply chain, need to be in communication so that the results of the research move efficiently to the people who can develop it and incorporate it into their products and services,” Merzbacher said. 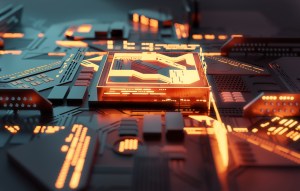