Lt. Gen. Michael Groen has been confirmed by the Senate to be the new director of the Joint Artificial Intelligence Center, the Department of Defense’s hub for fielding AI technologies.

The general’s confirmation comes with a promotion to major general as he assumes a DOD position with important oversight of emerging technologies. Groen comes to the JAIC at a critical time as the center expands some of its key work around warfighting initiatives and transitioning away from some of its earlier, lower-risk projects.

“The @DoDJAIC welcomed our new Director, Lieutenant General Michael Groen, USMC, to the team today. We look forward to his leadership!” The JAIC tweeted Oct. 1. Groen was confirmed by voice vote at the end of September.

Groen has a long history of working with military technology and intelligence. Before his appointment he served as the chief of Marine Corps intelligence and on the Joint Staff in senior positions. The general most recently came from the National Security Agency, where he led computer network operations.

Groen is the second confirmed director of the JAIC, following in the footsteps of Lt. Gen. Jack Shanahan, who retired from service in the Air Force this summer after standing up the JAIC. 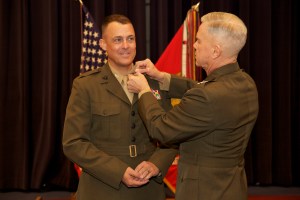