Former Deputy Secretary of Defense and artificial intelligence evangelist Bob Work says the DOD is at risk of losing the AI race and needs to rethink its departmentwide development model.

Work thinks that the Pentagon’s Joint AI Center needs stronger authorities over all of DOD’s projects to coordinate better between services and components. He said Wednesday at the AFCEA DC AI and ML Technology Summit that right now the military has a “one thousand flowers blooming” approach to its AI projects, with too many disparate ideas that won’t yield collective results fast enough. Instead, the JAIC should be a standards-setter and centralized architecture lead for AI across the DOD.

Within that enhanced JAIC, Work also suggested its scope could be broadened as well. He proposed the center add another “A” to its name, making it the Joint Automation and Artificial Intelligence Center, or JAAIC.

“I would recommend that we adopt a naval reactors-type model,” said Work, who is currently vice-chairman of the National Security Council on AI and the owner of TeamWork, LLC, .

The Navy harnessed nuclear power for its submarines and ships when Adm. Hyman Rickover took the reigns as “the Father of the Nuclear Navy.” The department was able to rapidly field the emerging source of power with the centralized zeal from Rickover. It’s a story Work says he wants to see with AI, giving the JAIC a Rickover-type authority.

His analogy gained some support, with the former head of the JAIC, retired Lt. Gen. Jack Shanahan, tweeting that the idea is “apt in some ways.”

“But that was [a] singular focus on one issue,” Shanahan added. “AI [is] much more like electricity or networks…an enabling capability.”

The application of AI in warfare Work most wants to see is AI-powered networks of information that can be paired with human operators to rapidly make battlefield decisions. It’s the core pillar of his “Third Offset Strategy,” a document Work authored during his tenure with the DOD. With a more “muscular” JAIC acting as both standards-setter and motivator for all DOD AI programs, Work thinks the nascent idea of Joint All-Domain Command and Control, the military’s network-of-networks concept, can become a reality much faster.

“We’re all saying the right things. AI is absolutely important. It’s going to give us an advantage on the battlefield for years to come,” Work said.

To amplify the power of the JAIC, the DOD needs a solidified public-private partnership as a means to compete with the Chinese civil-military fusion, Work added. The idea would be to create a bridge between the sectors, driving change for easy collaboration. In specific, Work said, the DOD should prioritize testing and evaluation with some setup akin to a national consortium for companies and academic institutions to help DOD test new algorithms.

“We may be losing the race due to our own lack of urgency,” he said 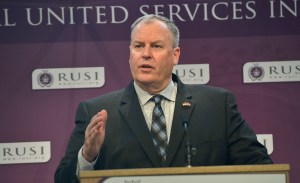