NASA’s chief information officer urged agencies to get ahead of policies like Trusted Internet Connections 3.0 so their upgrades of mobile communications systems don’t run afoul of the Office of Management and Budget.

Renee Wynn, speaking Tuesday at an Advanced Technology Academic Research Center event, said her agency is excited that TIC 3.0 guidance is in final review and will accelerate government cloud uses.

Wynn briefs the Federal CIO Council on NASA’s efforts to use mobility to deliver government services, including emergency management. Agencies should work more closely with OMB to craft mobile-friendly policies, she said.

“OMB is already beginning to think about what policies need to change in order to enable this because otherwise CIOs like myself are going to have to make risk-based decisions that are outside some of the policy frameworks because they don’t match up,” Wynn said.

Those decisions “could result in a government hearing” if an agency oversteps federal regulations that haven’t been updated, she added.

NASA is working to better secure communication links with its flying assets in space for constant connections. The agency plans to send a crew to the moon by 2024, including the first woman, with the intent of using the mission as a stepping stone for travel back and forth from Mars.

No human has landed on the moon since Apollo 17 in 1972, and mobile data sharing will be critical to the new mission and communication between space suits. So NASA has established four mobile priorities: mobile security, acquisition, fifth-generation wireless network infrastructure, and mission enablement.

“Security has to be from the beginning; we didn’t do it when we invented the internet … and we’re all paying that price,” Wynn said. “I’ve paid it many times. I think I can show up to China, and I’ll be greeted there as happily as I’ll be greeted here.”

On the acquisition front, NASA’s focus is supply chain risk management and ensuring data goes where it’s intended, she said.

Zero-trust networking remains in the experimental stage, but NASA is thinking about cybersecurity for the command center and mobile simultaneously.

“We are working rapidly to modernize our infrastructure,” Wynn said. 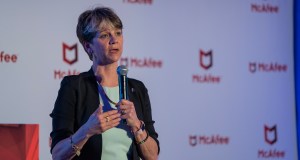 NASA wants government to stay on top of mobile policies