The latest National Action Plan for Open Government, scheduled to be released later this month, is a “huge opportunity to give open government a refresh,” according to a senior White House official working on the transparency initiative.

The forthcoming document will, as its three predecessors have, set U.S. open government goals for the next two years. The perennial mission is to make the government more “open, accountable and responsive.”

But this year’s plan — the first under the Trump White House — is being created in the context of a presidency that isn’t often perceived to value openness, accountability or responsiveness. So what does that mean for the United States’ commitment to the multilateral Open Government Partnership it helped create?

Officials at the Office of Management and Budget, which is overseeing the creation of the document, are confident that it is a nonpartisan, governmentwide issue. But open government experts are concerned that the White House’s seeming disregard for transparency may seep into the plan.

OMB officials imagine the new plan will be a little different from past editions in some key ways. Firstly, they hope it’ll be more “streamlined.” The third NAP, released in October 2015, for reference, included 45 “commitments” at the outset, and more were added in September 2016. It was a big document, it covered a lot of ground, and officials say some the feedback accused it of being a little confusing.

So this time they hope to organize the NAP around a handful of core themes, pulled from the suggestions of federal agencies and civil society. There are currently 143 suggested commitments on the National Action Plan GitHub page.

GitHub is being used as a central repository for ideas, officials confirmed, joking about how this lends transparency to the creation of plans for further transparency.

The call-out for participation on the National Action Plan page at open.usa.gov also hints at how the fourth plan will be different.

“This year marks an important transition for U.S. commitments to open government, as we move from the broader initial set of initiatives and activities that have characterized our NAPs in the past, to a more streamlined, impactful, and elevated set of commitments,” the site reads.

“Commitments should be achievable by June 2019,” it continues. “They should be new, ambitious, and measureable (sic).”

All this said, OMB officials made it clear they still “don’t know exactly what [the plan] will look like.” That’s because the it’s still in creation — on Oct. 2 the GitHub page closed to further submissions, and now the hard work of building a coherent single document begins.

Though this work is being led by the White House, officials took pains to explain that it’s not a partisan matter. “This is not about the White House or the administration,” the official told FedScoop.

Rather it’s about “good government” — a standard, the official suggested, that everyone can agree on.

Despite this talking point, politics is never far from view.

Various members of open government and transparency groups have expressed concern over what it means to have the Trump administration — which has openly flaunted transparency norms like the expectation that a presidential candidate releases his or her tax returns — involved in an open government effort.

Demand Progress, for example, declined to participate in the drafting of the NAP this time around, citing what it called Trump’s “authoritarian policies.”

In a blog post from September, the Sunlight Foundation’s Alex Howard and John Wonderlich also questioned this White House’s legitimacy on issues of transparency.

“From tax reform to foreign affairs, the Trump White House has lost the ability to make reliable commitments on substantive policy altogether, as near-constant contradiction and disinformation from the President himself render all White House policies tentative and temporary, eroding the trust of the nation’s allies and strengthening the hands of autocrats who thrive in post-truth environments,” the post states.

Over the past month Howard has attended multiple NAP4 co-creation meetings organized by OMB — meetings he told FedScoop were “well-run” by people who believe in the mission. But his reservations remain — at the end of the day a non-binding, voluntary pact like a National Action Plan for Open Government is only as good as the actions actually taken.

OMB responded to these concerns by reiterating that this is not about the White House.

Another area of concern is the content of the plan. At an invite-only co-creation event at the General Services Administration on Sept. 8, the discussion focused on the promise of emerging technologies like blockchain and machine learning. Now many suggested commitments related to blockchain are displayed on the NAP4 GitHub.

But, Howard said, it is important to disentangle technology from open government. Sure, technology has the potential to aid in transparency efforts. But it is a means, not the end itself.

Hudson Hollister, founder of the Data Coalition, echoed some of this sentiment. “I’ll be perfectly frank,” he said. “For now blockchain is a distraction.”

From the Data Coalition perspective, the potential for blockchain in the federal government (while enticing) is still a while off — first the government needs standardized open data practices.

It bears mentioning, however, that the U.S. is not alone in what experts see as a conflation of e-government (the means) and transparency (the end). Multiple open government advocates told FedScoop that the National Action Plans of other Open Government Partnership countries also tend to be technology-focused.

Hollister, for one, is pleased that NAP4 is being drafted, and that civil society gets a chance to weigh in. He described the administration officials who are convening the co-creation meetings as “invested.”

“I’m happy that it’s happening,” he said. “I’d prefer the Trump administration to keep doing it.” It’ll be up to civil society, he said, to hold the government accountable to the content of the plan.

Most immediately, civil society will be able to assess the good faith with which the administration approaches this process by observing what suggested commitments ultimately get included in the final NAP.

Howard has a test in mind — the co-creation process will be successful, he said, “to the extent that this administration accepts commitments that come from people who do [open government work] for a living.” 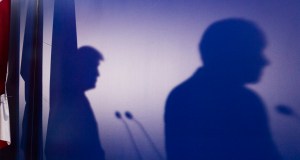 The fourth National Action Plan for Open Government is coming. But what will transparency look like under Trump?