The Navy is conducting a major exercise in the Pacific that integrates unmanned and crewed systems, using artificial intelligence to pilot vehicles above, at and below sea level.

The Pacific is conducting the Fleet Unmanned Integrated Battle Problem 21 (IBP21) exercise in San Diego. It is the first of its kind and comes after some initial cross-ocean, autonomous vessel testing, but not in concert with crewed ships like in IBP21.

The Navy is touting the exercise as a major step toward proving new “unmatched” capabilities and marking a transition to a hybrid force structure.

“We are not yet where we want to be,” said Rear Adm. Lorin Selby, chief of naval research. “But we are getting closer. As our potential adversaries go all-in on unmanned platforms, we must and will maintain a dominant force that can meet and defeat any challenge.”

The Navy has some support in Congress for its transition to a networked force of crewed and unmanned systems, but some remain skeptical. The department released its unmanned “Campaign Framework” in March to mixed reviews, with retired naval officer Rep. Elaine Luria, D-Va., saying it lacked needed detail.

“I am not alone as a member of Congress who really doesn’t understand where the Navy is going with this,” she said in a March hearing.

The Navy has pushed forward despite the initial criticism, adding that it will continue to test and develop the technology and strategies behind using more unmanned systems in the fleet.

“Our goal is to operationally integrate and continuously improve the types of intelligent and autonomous technologies that Pacific Fleet is testing right now,” said Jason Stack, Office of Naval Research’s technical director and autonomy lead. “We will do this ethically and responsibly by always ensuring our Sailors and Marines can exercise the appropriate levels of human judgement over our machines. This will be our enduring competitive advantage.”

The Navy said the test event includes medium displacement unmanned surface vehicles (MDUSV) and long-endurance unmanned aeural systems (UAS). The platforms can be used for surveillance, anti-submarine warfare and other missions, according to the Navy.

One of the MDUSV’s used is the “Sea Hunter,” which made a self-piloted journey from San Diego to Hawaii and back in 2019. Other systems, including aerial ones, will be included in the network of systems, the Navy said.

All of the military’s testing of autonomous systems is rooted in its new operational construct, Joint All Domain Command and Control (JADC2). It’s a way of approaching warfare where instead of siloed commands with decisions being made at individual service levels, the forces of the military are combined through an Internet of Things capability. Leaders hope the technology will allow communications and the command and control of forces to integrate and use real-time data. 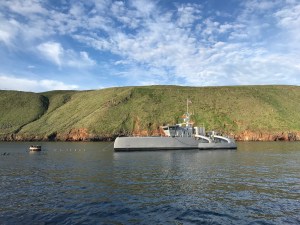