Critics of the Navy and Marine Corps’ transformation plans are advocating for forces that would be ineffective and unprepared to meet future warfighting requirements, the services’ top officers suggested Monday.

Lawmakers on both sides of the aisle have slammed the Navy’s fiscal 2023 budget request released last week. It calls for decommissioning 24 ships and buying nine new ones. Doing so would reduce the battle force to about 280 ships, well short of the 355-ship fleet that Congress and other seapower advocates have called for.

But the idea behind the sea service’s shift centers on prioritizing readiness and modernization over capacity, Chief of Naval Operations Adm. Michael Gilday said Monday during a panel at the Sea-Air-Space conference at National Harbor, Maryland.

“We need a ready, capable, lethal force more than we need a bigger force that’s less ready, less lethal, less capable. In other words, we can’t have a Navy or Marine Corps larger than what we can sustain. That’s important. So let’s keep it real with respect to what we’re going to field out there,” Gilday said.

The services will end up with a larger but ineffective force if policymakers want to “make capacity king,” he added.

The Navy has to make difficult decisions to divest of certain capabilities and free up resources to invest in more modern capabilities, Gilday asserted.

The future years defense program, which has yet to be publicly released, will support the transition to a more capable fleet, he said.

“We’re on the right path. That path is not popular with everybody in this room and generally not on the Hill,” Gilday said. However, “I think it both fields a force today that’s ready to go and invests in a force … mid-decade and beyond that will serve us well.”

“The investments we’re making AI are proving to be very, very useful against an increasingly sophisticated adversary,” he said.

Gilday envisions a future where large unmanned vessels will provide a “floating arsenal of weapons.”

The service plans to field ship-launched and submarine-launched hypersonics in the 2025-2028 timeframe.

“We’re maxing out the production line of all of our long-range weapons at high speed in this budget,” Gilday said.

Meanwhile, retired officers and other former officials have been bashing changes underway as the Marine Corps pursues Commandant Gen. David Berger’s vision known as Force Design 2030, which includes cutting tanks, artillery and other capabilities to free up money to invest in other systems that he believes will be more relevant in future competition with China in the Indo-Pacific, such as long-range anti-ship missiles and unmanned platforms.

“In the end the Corps will have more space experts, cyber warriors, influence specialists, missileers and others with unique skills — many of which already are provided by other elements of the joint force. But it will only have them because it gave up Marines prepared to close with and destroy the enemy,” Van Riper wrote.

He continued: “No longer will it be the Corps I served and loved for so many years, but a mere shadow of what was once a feared fighting force!”

Speaking on the Sea-Air-Space conference panel, Berger said the service must adapt to keep pace with changes in warfare.

Berger acknowledged that the force changes he’s promoting are not without risk. However, “none of us have a belief that we should wait until ‘28 or ‘30 or ‘31” to make major changes, he said.

“If you’re going to match the speed of the change in the character of war, meaning the threats, technology, everything that’s involved in operating environments that we’re going to face in the future, and if you’re going to accelerate [modernization] then you have to divest of some platforms, you have to adjust your force structure, you have to do things upfront that will create the resources” to transform, Berger said.

The Corps is prioritizing capabilities that would be most useful in the Indo-Pacific.

The service is in the third year of its ongoing force transformation, and the 2023 budget request aims to “keep that momentum going,” he said.

Berger said his success or failure as a service chief won’t be fully apparent until five to eight years from now.

“That’s the only time you’re really gonna know whether the service chiefs … did their homework, made the hard decisions, got rid of stuff that they had to get rid of to put the resources into the right places,” he said. 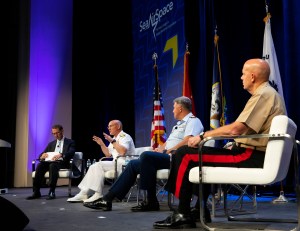