The FBI can request searches using facial recognition technology on 18 state entities’ collections of driver’s license and passport photos. And now it’s easier for citizens to know what these FBI agreements look like.

All 18 memorandums of understanding are now published online on the House Oversight and Government Reform Committee’s website.

The committee held a hearing earlier this week to discuss the FBI’s use of facial recognition technology. Alvaro Bedoya, executive director for the Center on Privacy and Technology at Georgetown Law, called for notifying citizens that their information is being used in this way.

He said citizens should be allowed to choose — or opt-in — to volunteer their information for it to be searched in this way, and should be able to vote as a state if they want to allow facial recognition searches of these photos.

The unit “can search or request to search databases owned by the Departments of State and Defense and 16 states, which use their own face recognition systems.” The committee also found Maryland and Arizona had agreements with the FBI.

“According to FBI officials, at FBI’s request, state partners conduct automated searches of their own databases, and some states manually review the automated search results to determine if a likely match exists before selecting photos to return to the FBI. Other states return photos without conducting any manual analysis,” the GAO says.

Half of all American adults are in a law enforcement face-recognition network, the Center on Privacy and Technology at Georgetown Law has estimated.

The Electronic Privacy and Information Center, who has been tracking how the FBI has been using facial recognition technology, published some of the agreements in 2013 after getting them through a Freedom of Information Act Request.

The center calls the practice of searching department of motor vehicles’ photos a “massive virtual line-up.” 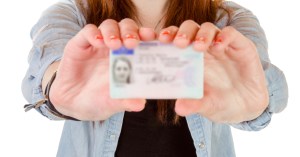