Tucked into the Pentagon’s new, broad plan to operationalize artificial intelligence responsibly across the department’s sprawling enterprise is a clear elevation in seniority of its primary mechanism for AI governance.

The Chief Digital and AI Office’s (CDAO) Governing Council — a 4-star level governance body run by this newly established office that falls under the deputy defense secretary — has replaced the former AI Executive Steering Group, which was a 3-star level governance body led by the Joint Artificial Intelligence Center (JAIC), according to the new RAI Strategy and Implementation Pathway.

“For any business that we want to do on behalf of the department, that’s our place to get out, to collaborate and to really get the feedback from all the different stakeholders we need in the organization before we bring that to the deputy [secretary of defense],” Margaret Palmierei, deputy chief digital and AI officer, told FedScoop this week.

When several disparate agencies — including the JAIC — were recently reorganized to operate under the new CDAO, more than 20 different working groups, governance forums and other cadres associated with data analytics and AI under their purview also came with them.

“In government, we tend to love to just add new things — but in this case, we said, ‘Let’s simplify and bring all those different governing forums under one council,’” Palmieri explained.

The Pentagon’s newly named Chief Digital and AI Officer in charge of the CDAO, Craig Martell, is the chair of this council. Through the new coordination unit, he’ll engage directly with senior military and Defense Department leaders on a range of topics associated with the high-priority emerging technology.

“It really, I think, brings more transparency to all the different efforts across the department and allows our stakeholders to have a voice at the table as we start to take on the systemic aspects of this and the department. And it makes sure that, you know, as we elevate issues to the deputy level, we can represent all those different positions in the same place,” Palmieri said.

Greg Allen, director of the AI Governance Project at the Center for Strategic and International Studies and the former director of strategy and policy at the JAIC — said this elevation in governance marks the “clearest sign yet that [DOD] leadership views accelerating AI transformation and doing so responsibly as something that top leadership needs to be spending their time on.”

Elements of the new pathway reflect the fact that there’s still plenty of work to do in this area, but that Pentagon’s higher-ups are serious about this work, he noted.

Still, “one question that this document doesn’t answer is, on what issues will the governing council issue decisions, rather than advisory recommendations?” Allen said.

The former AI steering group was primarily an advisory body, though it did also vet decisions by some important decision-makers, such as the Deputy’s Management Action Group.

“That was appropriate at the time, given how young and small the JAIC was — but it’s time for DOD AI governance to take the next step,” Allen said.

Although Palmieri didn’t confirm whether that’s all sorted out just yet, she noted that “to the extent that the deputy secretary wants to delegate certain decisions to the CDAO, we are ready to make those decisions.” 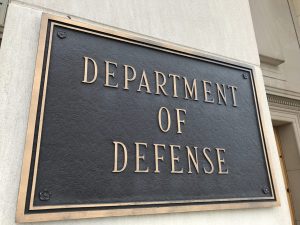