Currently, the FTC uses a simple and less secure email process for antitrust whistleblower complaints, which four tech scholars at the Aspen Institute want to revolutionize with a new proposed user interface. The researchers say the tool could improve the collection of whistleblower reports of anti-competitive corporate behavior.

Collecting evidence of competition law violations from employees is a key part of the FTC’s enforcement action. Such evidence is crucial as increasingly complex algorithms and code within commercial products make anticompetitive behavior harder to detect.

The Aspen scholars—Arjun Hassard, Justino Mora, Julia Uhr, and Ritvik Vasudevan—are pushing the FTC to deploy their “smart and secure reporting channel,” according to their policy brief, to allow better communication between FTC staff and whistleblower informants using an open source code platform.

“When we showed it to them the FTC was very impressed with what we built,” said Arjun Hassard, the lead author of the Aspen policy brief and a creator of the proposed FTC whistleblower tool.

“They said the prototype made a lot of sense so we hope that it will be used in FTC cases in the future especially since the FTC is underfunded and this tool is pretty cheap to maintain given that it’s built on open source software that can easily be run internally instead of a multi million dollar contract,” Hassard said.

The FTC approved the four Aspen scholars’ creation of the tool, an offered broad advice about what the agency would need from such a tool before the tech scholars created the prototype. The Aspen scholars are optimistic that the trade commission will consider using the prototype as a guiding design and proof-of-concept for future whistleblower channels.

The prototyped tool is built upon GlobaLeaks, a well known and trusted open-source, free software intended to enable secure and anonymous whistleblowing initiatives that was launched in 2011.

According to Hassard, the focus of the whistleblower tool is to educate and reduce the risk to civil participants, mostly tech workers and employees, from voluntary reporting of anti-competitive behavior.

“Since it’s open source we’ll get feedback from white hat hackers, privacy groups and others to create stronger security and a much better sense of trust which we think is innovative in the government space,” Hassard said. “It would be one of the first major foundational frameworks for informants that is open source.”

Whistleblowers and evidence from long multi-year investigations play a key role in the FTC’s ability to successfully prosecute and regulate tech companies for anticompetitive practices and force behavior change.

The trade commission has been vocal in the past two years under Chair Lina Khan about getting creative about going after Big Tech companies’ monopolistic practices by filing more antitrust lawsuits, blocking more mergers, revisiting previous deals, and being open to more whistleblower complaints.

Antitrust violations or anticompetitive behavior is harder to realize, detect, and communicate when it is hidden within vast amounts of software code or complicated algorithms, Hassard said, and this is increasingly an issue the FTC wants to tackle and be more aggressive about.

“There are not many examples of open source and incentive design of this type working well within the government right now and we want good ideas in this space not just to be held unnaturally in the private space for personal enrichment but rather for societal public good as well,” said Hassard. 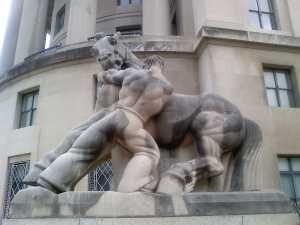