Robin Carnahan,  was confirmed by the Senate as Administrator of the General Services Administration Wednesday afternoon.

She was confirmed by voice vote, meaning there was not a final tally of yeas or nays on her nomination.

Carnahan founded and led the state and local government practice at 18F, GSA‘s tech consultancy, from 2016 to 2020, having previously been Missouri’s secretary of state. She also co-founded the State Software Collaborative as a fellow at Georgetown University’s Beeck Center.

When she was at GSA during the Obama administration, Carnahan helped state and local governments improve their digital services while cutting costs. Her practice taught non-technical officials about IT risk management, procurement and modernization projects.

As Missouri’s secretary of state Carnahan modernized online services for hundreds of thousands of customers related to both elections and securities. A Democrat, she also ran for one of Missouri’s Senate seats in 2010 but lost to Republican Roy Blunt.

Commenting on her appointment, Carnahan said: “I am grateful for the support of the Senate, and I am honored to serve as the next Administrator of GSA.

“GSA is at the heart of creating a government that effectively delivers for the people and taxpayers, and I am committed to doing all I can to support that important mission.” 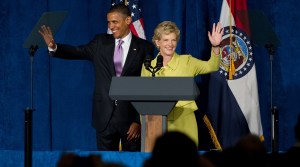