Lietzau, a longtime civilian DOD official and former Marine, currently leads the transitional Personnel Vetting Transformation Office, the DOD’s interim agency that was established to smooth transition of background checks to the DOD.

The DCSA is the agency in charge of all federal security clearances. President Donald Trump kicked launched the new office with a 2019 executive order transferring background check responsibilities from the Office of Personnel Management and the National Background Investigations Bureau to the Pentagon.

Lietzau will take over as the permanent director sometime near the end of the month, according to a DOD spokesperson.

“Bill’s leadership experience within the military, government, and industry, combined with his role leading DCSA transformation efforts, make him the ideal candidate to hit the ground running and lead the DCSA,” Joseph D. Kernan, undersecretary of defense for intelligence and security, said in a statement. “Bill understands the criticality of the background investigation and security mission, and the necessity to ensure a trusted workforce and protect critical defense information from theft or disclosure.”

Currently, Charles “Charlie” Phalen Jr. has been the acting director of the agency since July 2019. During that time, DCSA has consolidated about 95% of the federal background check and security clearance process under a single agency.

“I want to thank Charlie for his dedication and commitment to the DCSA mission, and for his willingness to lead the DCSA workforce through one of the largest organizational transfers in the Executive Branch and positioning the Agency for transformation while maintaining uninterrupted support for all of DOD and its government agency customers,” said Kernan.

Lietzau will take over at a time when the DOD is making strong progress reducing the backlog of security clearances. Counterintelligence officials told Congress in January the DCSA has reduced the background investigation backlog from a high of about 725,000 cases in April 2018 to 231,000. 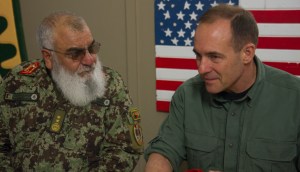