“No digital transformation or organizational transformation will be successful without leadership transformation,” a senior Google Cloud executive told government leaders at FedScoop’s IT ModTalks virtual summit, March 2. But it’s increasingly important for public sector leaders to lean into the quickening pace of change by taking a more adaptive approach to leading.

Alexis Bonnell — anemerging technology evangelist for public sector at Google Cloud and a former chief innovation officer at USAID — acknowledged that many government leaders are still regrouping from the impact of the pandemic and the rush to support a remote workforce.

But during a featured interview at the two-day summit, Bonnell urged agency leaders to step back from their digital modernization and recovery efforts and think about modernizing the way they lead.

“I think the most interesting time for leadership is now, because now is when a leader has to think about and decide who are they going to be beyond the [pandemic] crisis. Are they going to be a leader who defaults to the previous status quo — that reaches for the familiar or normal? Or are they going to be that ‘living system leader’ — to be more flexible, more curious, more resilient, and most importantly, more ready for that rapidly evolving future?”

Bonnell defined “living system leadership” as a mindset that enables curiosity, fosters agility, and prepares an organization to “transform and adapt to the real changes that are evolving rapidly around us,” the way many have to during the pandemic.

“One of the things we saw [in successful leaders] is that they were able to recognize and acknowledge change and embrace it. They also had a great recognition that the pace of change of discovery and insight was only going to get faster. And they were able to translate this new pace into kind of adaptive or more agile roles for themselves and their teams,” Bonnell said.

“Leaders who snap back to old paradigms might not only find themselves with under-optimized programs and technology, but they may also see a talent drain,” she cautioned. “What we are seeing living systems leaders do: Instead of building time capsules – thinking about things in the present – they’re building change engines.”

Bonnell outlined what distinguishes these types of leaders:

On the people side: “They create psychological safety. The drive and reward curiosity. And they reset an organization’s relationship with risk. They strive to make themselves as permeable to new ideas and partners’ technologies as possible. They look to maximize their flexibility to use information in the most powerful ways. And they give their teams the room and tools to collaborate, to stretch their wings and become intrapreneurs,” Bonnell said.

On the technology side: “They have a new paradigm of expectation as technology leaders for partners and vendors. They demand interoperability, and they reject technology monoculture. They also assume multi-cloud and API-powered systems because they know those tools will give them options. And they reject vendor lock-in because they know that one of the quickest ways to kill the future potential of their agency is to tie their hands to a technology,” she said.

On the policy and process side: “They think about creating policy and procedures that think forward. They consider the generational-level impact of their decisions, meaning how might their decisions actually restrict the agency or the next leader-to-come and their ability to respond to opportunity or threat. They also accept that technology used to be kind of a match-process game; but now, technology can really be used to maximize the mission.”

She concluded by describing Google Cloud’s evolving role and ongoing commitment to the public sector.

“It starts by asking, ‘How can we be an enabler for the very best of public servant technology leaders and not a barrier?’ she said. The answers, she explained, include being committed to open source; investing in interoperability; supporting multi-cloud; not requiring vendor lock-in; trying to eliminate generational technology debt; having zero trust built in organically into many of Google’s products; and making them as user-friendly as possible.

Watch the entire interview with Alexis Bonnell. And find out more about how Google Cloud is helping government agencies improve operational effectiveness.

This article was produced by Scoop News Group and FedScoop and underwritten by Google Cloud. 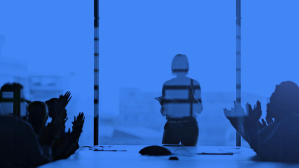 The importance of modernizing leadership, not just IT systems