The Postal Service’s regulatory agency has terminated employment of its chief data officer, Russell Rappel-Schmid, after he was arrested in San Diego on felony charges.

He was booked into San Diego Jail and released on bail that was set at $25,000 early on Tuesday morning, Baggs said. He is scheduled for felony arraignment on July 18.

The Postal Regulatory Commission said in a statement Monday that the agency learned of the recent arrest of an unnamed employee and terminated his employment immediately.

“The commission is shocked and horrified at these serious allegations and maintains a steadfast commitment to promptly deal with any claims of employee misconduct,” the agency wrote.

The commission is an independent federal agency that provides regulatory oversight over the Postal Service to ensure transparency and accountability over the USPS.

Before joining the commission, Rappel-Schmid was the chief data officer for the State of Alaska and previously spent nine years with the U.S. Postal Service Office of Inspector General, according to his LinkedIn. He also served more than 20 years in the Marine Corps, mostly as an auditor. 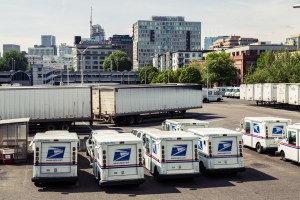