The 12-year, $231 million task order covers modernization of the Treasury‘s voice and data networks and cybersecurity as the department looks to enable its increasingly mobile workforce of more than 100,000 employees across about 700 locations.

Lawmakers initially expressed concern Treasury wasn’t keeping pace with the $50 billion EIS contract’s final deadline of Sept. 31, 2022, for transitioning off its predecessor Networx, but the department’s transition is now more than three-quarters complete.

“Hats off to the technology leadership and team at Treasury for making a deliberate and comprehensive commitment to network modernization,” said Chris Smith, a vice president with AT&T Public Sector. “We look forward to working with Treasury to help transform its communications capabilities and help ensure it is future-ready for further innovation.”

Work is already underway with Treasury poised to obtain EIS technology and cost savings quickly, according to AT&T‘s announcement.

AT&T’s last big EIS task order award was a 10-year, $311 million contract with the National Oceanic and Atmospheric Administration in November to prepare for 5G and edge computing by consolidating the agency’s networks into one Internet Protocol-based network. 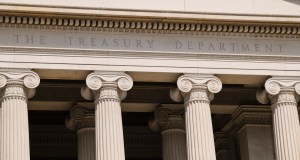