In 2017, the U.S. government spent $3.98 trillion, representing nearly 20 percent of the country’s gross domestic product. The Digital Accountability and Transparency Act (DATA Act) was passed into law in 2014 to provide detailed information on how those federal dollars are allocated each year through contracts, grants, loans, and other financial assistance awards. Under the DATA Act, federal agencies are required to report this information every quarter in a standardized way, using the DATA Act Information Model Schema (DAIMS), and publish this data on USAspending.gov.

For more than three years, the Department of the Treasury and the Office of Management and Budget (OMB) have been working to implement the DATA Act and make large amounts of new data available and useful to the public. Their efforts are now coming to fruition. Agencies have been submitting data to Treasury using the DAIMS since last May, and there is now enough data available to begin the new kinds of analyses that the DATA Act makes possible.

The Department of the Treasury, which manages USAspending.gov, is also planning to relaunch the federal spending website in the coming months with new features, functionality, and much more data than before. A preview is currently available at beta.USAspending.gov. Among the updates, Treasury has developed the Federal Spending Explorer, which breaks down spending information by budget function, agency, and object class; Award Search, which includes a wide range of advanced filters to target specific datasets; and Keyword Search, which provides a broader picture of federal spending data based on any given theme. Treasury has also launched the Data Lab to test out new visualizations for data on federal spending and related issues, including a recently published analysis of federal spending related to homelessness.

On February 7, the Department of the Treasury and the nonprofit Center for Open Data Enterprise co-hosted a Roundtable on Innovating with Federal Spending Data to advance these efforts. The Roundtable convened a wide range of stakeholders from inside and outside of government to “identify new applications of federal spending data and develop recommendations for increasing its use and impact.” The event was held under the Chatham House Rule, which allows content from the Roundtable to be shared without direct attribution to individual participants. Today the Center has published a report on key takeaways from the Roundtable, which is available here.

The Roundtable included presentations to give participants an overview of the federal spending data now available and invite their ideas on how it can be used. Leadership from Treasury and OMB described their current plans for DATA Act implementation, including David Lebryk, Treasury’s Fiscal Assistant Secretary; Amy Edwards, the Acting Deputy Assistant Secretary for Accounting Policy and Financial Transparency; and Victoria Collin, who is Acting Chief of the Management Controls and Assistance Branch at OMB’s Office of Federal Financial Management. Other presentations explored ways that different users could apply the new data and features – from a small business owner interested in competing for federal contracts in plumbing, heating, and air conditioning services to a journalist working to track federal funds directed towards Hurricane Maria relief efforts.

“This is an exciting time for anyone who wants to understand more about the federal government and a significant portion of our economy,” said Booz Allen Hamilton Vice President Bryce Pippert, who participated in the Roundtable. “These new federal spending data resources will empower citizens, journalists, policymakers, and government leaders to quickly answer questions about where federal dollars go. And this spending data can now be easily combined with other programmatic and demographic information for analysis to answer questions about the impact and effectiveness of resource allocation.”

Improving Government Operations and Evidence-Based Policymaking. Federal agencies can use information published under the DATA Act to improve internal government operations. For example, agencies can analyze federal spending on procurement across the U.S. government to reduce duplication and identify opportunities for shared services. Agencies can also use this data to identify cross-government resources that could be deployed to address time-sensitive funding needs or government-wide emergencies, such as the opioid epidemic or major natural disasters.

Creating Opportunities for Federal Grant Recipients. Federal grant applicants and recipients can use federal spending data to better understand agencies’ funding priorities and improve their application outcomes. Agencies can also evaluate the success of their grants through new analyses of the distribution and impact of grants by specific regions, demographic groups, or issue areas.

Developing New Business Insights. Businesses across all sectors can use federal spending data to identify sources of government funding for job training, technology modernization, and other business-relevant concerns. Current and potential government contractors can also use data on government procurement to identify trends and opportunities across different federal programs.

Supporting Academic and Policy Research. Federal spending data offers a vast resource for academic and policy research across all domains. This includes the ability to analyze the impact of federal spending in key areas of national concern, ranging from healthcare, housing, and infrastructure to veterans’ affairs and education.

“We are starting to see the enormous benefits that can be gained from mining the rich array of data now available in USAspending.gov,” said Roundtable participant Kathy Conrad, Director of Digital Government at Accenture Federal Services. “By applying advanced analytics to this valuable data, including using descriptive and predictive data mining and machine learning, governments, businesses, academics and other stakeholders can gain insights that help answer complex questions and improve services for our citizens and consumers.”

The Roundtable on Innovating with Federal Spending Data represents an important step towards showing the full potential of this newly available data, convening user communities to explore updates to USAspending.gov, and thinking critically about how this information can be applied in different ways. Through efforts like these, Treasury can ensure that federal spending data is recognized as a critical government data resource like Census data or geospatial data, and that it will be widely used in ways that will have a major positive impact.

Joel Gurin is President of the Center for Open Data Enterprise, where Katarina Rebello is a Policy Fellow. The Center thanks its Open Data Partners, Accenture Federal Services and Booz Allen Hamilton, for supporting its work on the Open Data Roundtable series. 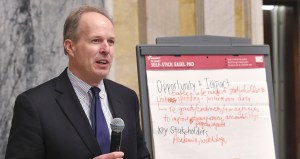