The Department of Agriculture wants to move to a standardized platform for combining disparate farm data sets and building machine-learning models across them, announcing a partnership with Microsoft on Monday.

Ranveer Chandra, chief scientist at Microsoft Azure Global, created FarmBeats during the company’s 2015 Artificial Intelligence for Earth hackathon. USDA hopes to roll it out at more than 200 other research stations, large commercial farms and even mom-and-pop operations.

The alternative is leaving data unused on hard drives at more than 90 research stations staffed by some 2,000 scientists and other researchers.

“The way we’re structured, we’re not capturing all the value from the data,” Michael Buser, national program leader for engineering at USDA ARS, said in the announcement. “It’s a huge loss for the agency.”

Beltsville Agricultural Research Center’s sensor network is monitoring soil temperature, humidity and acidity as it grows cover crops — those grown during the off-season to limit weeds, manage pests, prevent erosion and improve soil quality for primary crops. Water levels are also being tracked to help with water budgeting during the next crop cycle.

At the same time, a weather station is collecting data on air temperature, wind speeds and rainfall, while tractors capture crop heights, biomass and greenness.

The data is then fed into FarmBeats, which can create cloud-based artificial intelligence models of farm conditions.

“There’s a lot of competition for arable land with urbanization,” Dan Roberts, research leader at the Sustainable Agricultural Systems Research Laboratory in Beltsville, said in a statement. “What we need to do is develop more environmentally benign crop production systems — the new green revolution, if you will.”

“There’s so much spatial variability in a field, from soil, topography and climate perspectives, that we need the data that help us provide site-specific solutions,” said Steven Mirksy, the research ecologist spearheading the pilot.

The data itself is transmitted from edge devices to the Azure cloud via television white spaces — unused broadcasting frequencies between channels — because many farms lack internet access. Those frequencies allow transmission of images showing crop distress to farmers, who can’t personally observe all 5,000 to 10,00 acres of fields in some cases.

Azure cloud serves as a centralized, secure repository for historical and future data that Buser wants to eventually use to continuously monitor USDA weather stations and animal research sites.

Aside from USDA, several farms in other states are testing FarmBeats, which Microsoft intends to integrate into device manufacturers’ products, like sensors, in the future. 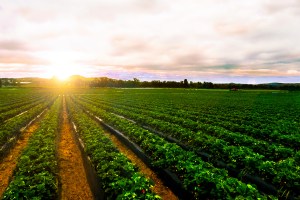