As the Pentagon’s acquisition arm nears splitting into two, the focus is on bridging the gap between engineers in labs and warfighters on the battlefield, the office’s leader testified Thursday.

Some lawmakers worry how this might deepen the so called “valley of death” — the struggle for the Pentagon to transition and scale research-and-development efforts, particularly innovative technologies, for use on the battlefield — but Undersecretary of Defense for Acquisition, Technology and Logistics Ellen Lord said she hopes to reverse the trend by simplifying the acquisition process and taking risks earlier through innovative prototyping.

“Quite simply what we’re trying to do is push the risk into the research and engineering side with a lot of prototyping and experimentation so that there are many, many iterations in order to understand the capabilities of new systems and the cost of new systems before pushing them over to the [acquisition and sustainment] side,” Lord, who will take over as undersecretary for acquisition and sustainment after the current office splits, told the Senate Armed Service Committee.

Her new office, she explained, will play a part as well by working to streamline and simplify acquisition.

“You basically have a flowchart and you use the simplest methodology possible to get things on contract so we’re not held up in this ‘do loop’ where you want to do something and you can’t get it on contract,” Lord said. Other transaction authorities, which allows for the funding rapid prototype research and development pilots. will be a popular method for getting this done, she said.

Lord spoke recently with DIUx Managing Director Raj Shah “about how we can take the success they’ve had at DIUx” and build on it, particularly in using OTAs to attract small, innovative contractors to do business with the Pentagon. She leverages the Pentagon’s small innovative acquisition hub “to set up roundtable for me to meet with a variety of software companies, cause that’s where I’m focused right now.”

Likewise, she speaks “routinely with the Defense Innovation Board about how to do things differently,” particularly with the board’s chairman and former Google CEO, Eric Schmidt. “I was on the phone with him Monday asking him specifically what can I do differently to solve some specific issues,” Lord said. “And that’s helpful.”

Lawmakers are hoping those interactions rub off on Lord’s office, ultimately speeding up the Pentagon’s overall contracting process.

The work of groups like DIUx “should become the standard practice, not workaround to the regular system,” said committee Chairman John McCain, R-Ariz. “We need these innovations for major defense acquisition programs, not just science and technology efforts.”

McCain added: “You need to be willing to take more risks and be willing to fail when you try new things,” though he acknowledged that congressional oversight can complicate that.

Massachusetts Democratic Sen. Elizabeth Warren agreed that the DOD has to “get better at this.”

“Anything that has the name the ‘valley of death’ is not good in terms of acquisition of new cutting-edge technology,” Warren said. “We can do all the terrific research in the world, but if we can’t translate that into something that helps our warfighters, then we have failed at our essential mission.”

The complete transition of the spilt to two new offices will take about two years, Lord said. Former NASA Administrator Michael Griffin was nominated this week to be Lord’s counterpart focused on research and engineering — a position that will operate much like that of a CTO. 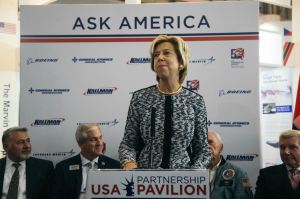