Senior Pentagon leaders have repeatedly emphasized their intent to use data as a strategic asset — but according to a new study shared exclusively with FedScoop this week, the department could benefit from more effective use of data collected through partnerships with tech consortia.

In a study by George Mason University’s Center for Government Contracting on Wednesday, experts argue that consortia are playing a pivotal role in high-profile and other Defense Department acquisition efforts, and particularly those associated with other transaction authorities (OTAs).

A consortium typically refers to a group of entities that forms an agreement to cooperate on hard-to-solve problems and achieve common objectives.

But the new research also suggests that DOD must improve how it captures and uses data to fully harness the value of such cadres.

“It is my sense that the data is not strategically being used on an enterprise level at DOD [regarding consortia]. So, while there may very well be pockets of places that have data on these contracts, or those contracts, or this consortia — or even this area, right, — it is not flowing up in a constantly comprehensive way. That’s step one,” Moshe Schwartz told FedScoop. “And step two, it’s not then being used to inform decision-making.”

Schwartz, a procurement expert who previously served as Executive Director of the congressionally mandated Advisory Panel on Streamlining and Codifying Acquisition Regulations, is now President of Etherton & Associates. He and Stephanie Halcrow — an external advisor to the Department of Defense’s Acquisition Innovation Research Center, senior fellow at GMU’s Center for Government contracting and former Professional Staff Member on the House Armed Services Committee (HASC) — provided FedScoop with a first look at this new research they co-authored, ahead of its publication.

Halcrow noted that during her time as a Congressional staffer, she had so many questions about the process and impact of consortia that seemingly didn’t have answers. “So I thought, this is the report that we want to write that I always wanted to read when I was on the committee,” she said.

In their study, the officials identified 42 consortia supporting agreements, as of May 2022. Of those groups, 38 support the DOD, and four are working with other federal agencies — and 12 of the overall 42 contributed data that informed the experts’ review.

“I think the biggest challenge that we found in writing this report was getting access to the data to support our findings,” Halcrow explained. “The data exists — but it is not publicly accessible in an easy way.”

Despite that issue, the report incorporates a complete history of the Pentagon’s work with consortia, how the group’s are typically composed and insights into some of the technologies they’ve recently enabled for national security purposes. Three specific use cases depicting consortia-enabled technological innovation are also included.

In one, DOD used its existing relationship with a medical defense consortium to solicit advanced research and manufacturing of 100 million doses of a vaccine to combat COVID-19.

“That is so much bigger than DOD, but without the consortia it would never have happened,” Halcrow said.

Ultimately, Halcrow and Schwartz found that consortia bolster engagements between government and non-federal players, expand the defense industrial base — and, in some circumstances, they can significantly speed up acquisition timeliness and promote innovation.

The co-authors conclude the report by providing seven specific recommendations to improve how DOD benefits from consortia going forward. At the top of that list is their suggestion associated with that gap in data: “improve visibility and transparency.”

“Part of the conversation around consortia and OTs has been about a lack of transparency and lack of visibility — and one of the questions was, ‘is it that there is no data?’” Schwartz said. But the research showed that “by and large, that data is there and people are generally willing to share it, particularly on the industry side,” he added, “so, let’s see what we can start exposing.”

Among other recommendations, the co-authors also suggested that DOD avoid additional regulatory burdens that could limit consortia, and focus on improving technology transition.

The two are planning an event at George Mason University soon to highlight their findings for the public.

“We would love to talk to as many people about it as possible — be they DOD, industry, academia, Congressional staff, or agencies — because we believe this is an important issue that all of them are interested in,” Schwartz said. “We would love to, I think, do more work in this area both in other events, as well as possibly a follow-on report. So, we’re already talking about that amongst ourselves and seeing if there are opportunities there.” 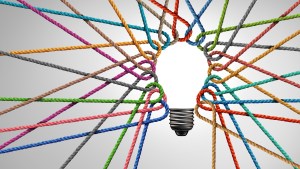