A lawmaker on the House Armed Services Committee is calling for artificial intelligence development to be mandated in future major defense programs, like helicopters or ground vehicle systems.

Rep. Anthony Brown, D-Md., said during a Brookings virtual event Friday that for the DOD to modernize, it needs to get serious about fielding AI in its programs and remove outdated platforms from its roster. The DOD should “include AI development in every major defense acquisition program,” Brown said as a means to win the AI race with China.

Calls for hard changes in the military’s acquisition and sustainment programs — shifting to modernization and the shelving of older systems — have been growing louder lately, despite many Congress members’ counterproductive support of programs that bring jobs to their district. A first-term congressman and retired Army colonel, Brown is one of those lawmakers who has been outspoken on modernization and workforce issues in the military.

“This might require significant changes to the Pentagon’s force structure, our posture, operational plans and surely to the acquisition system,” he said of modernization. “But now is the time.”

Brown called for the DOD to place a greater focus on AI, as it would force foundational shifts in how the department works with its systems.

That said, the addition of AI development and use in major legacy programs will likely result in friction. Many decades-old platforms, like old airplanes without modern software capabilities, would need to be scrapped or dramatically changed to incorporate modern tech. The change would also force platforms to rely more on data processing and enterprise IT systems to support the AI.

The shift would also need to happen with less money, Brown suggested. He warned that the DOD is likely to have to “compete” for its money in the wake of spending on coronavirus relief. The Pentagon has already projected a “flat budget” for upcoming fiscal years. 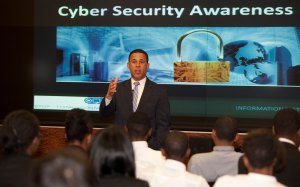