The White House plans to establish seven Artificial Intelligence Research Institutes and five Quantum Information Science (QIS) Research Centers with more than $1 billion in awards during the next five years.

Led by the National Science Foundation and Department of Energy respectively, the 12 multidisciplinary hubs will research the emerging technologies and train their future workforces while bolstering regional economies.

The investment is, in part, an effort to compete with those of foreign adversaries like China, who would use such technologies to suppress ethnic minorities, track private citizens and suppress free speech, according to senior administration officials.

“It is absolutely imperative that the United States continues to lead the world in AI and quantum,” Michael Kratsios, U.S. chief technology officer, said on a call with reporters Tuesday. “We know our adversaries around the world are pursuing their own advances.”

DOE and NSF spending on the 12 hubs is all a subset of the $1.2 billion authorized in the National Quantum Initiative Act of 2018.

NSF is partnering with the National Institute of Food and Agriculture, Department of Homeland Security Science & Technology Directorate, and Federal Highway Administration on the institutes. The first cohort consists of more than 100 entities active in 20 states like John Deere, which is supplying manufacturing research questions and will hire the resulting workforce, and historically black colleges and universities like Tuskegee University.

DOE leveraged the $625 million it’s spending on the QIS Research Centers to obtain $340 million in matching funds from industry and universities.

The centers are the result of a pitch competition, in which five groups comprised of 69 entities were selected for their plans to advance QIS broadly. Work at the centers will range from discovery research to the development of prototypes, said Paul Dabbar, under secretary for science at DOE.

“Their impact will go far beyond our labs, as each one of these will also have a plan in place to transfer technologies to industry or to other research partners,” Dabbar said.

Italy and Canada are even involved in the effort that will see IBM supply computing capacity, Microsoft experts, and Applied Materials fabrication material. 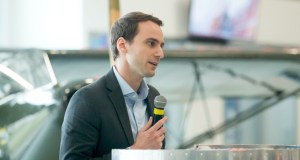