When the Air Force fully launches its Digital University later this year, the initial emphasis will be on training front-line IT and cybersecurity workers to enhance their professional knowledge, officials say, but the program eventually will expand all the way to senior leaders.

The online university, which is already available to airman in a beta version, is expanding its catalog of courses aimed at “upskilling.” A new contract with learning platform Udemy was announced Thursday after initial offerings from open-course company Udacity were announced in July. Online education company Pluralsight also recently announced that thousands of its courses would be available to airmen.

The Digital University is a prominent part of the department’s “Digital Air Force” strategy, which aims to consolidate IT networks and increase the technical acumen across the entire department. Business and Enterprise Systems Product Innovation (BESPIN) — an agile development lab named after a planet in the “Star Wars” films — hosts the beta version and is working through feedback from initial users.

“At a time of accelerated digital transformation, we are committed to nurturing innovation and delivering the best possible training to our Airmen,” said Master Sgt. James “Guideaux” Crocker, BESPIN’s chief technology officer. “With Digital University, we are able to democratize technical training across the Air Force and we are already seeing impressive results as Airmen gain the necessary skills to meet our digital modernization and growth needs.”

‘Digital acumen’ at all levels

While courses will be freely available for all airmen and full-time Air Force civilians, the university has several demographics it hopes will be early adopters. The skills-based courses are targeting the department’s “tactical operators” of IT networks and cybersecurity missions on a day-to-day basis for them to sharpen their skills. From there, BESPIN hopes that those that work tangentially to IT will gain more digital literacy through the courses. Finally, technology leaders like Crocker want to see all senior executives and high-ranking uniformed officers take courses to gain “digital acumen.”

“That one is really hard to do,” he said of getting senior leaders, who don’t have much extra room in their schedules, to buy in. But across the Air Force, “people are very hungry for knowledge,” he added.

“What we want to sell is making your job easier,” Crocker said. It’s a value that Silicon Valley companies emphasize in offering internal educational opportunities to workers.

The need is obvious within the Air Force, Crocker said. Many airmen already have to find ways to get training before their next assignment — the type of learning that Crocker said, in his experience, usually costs him money.

“I’ve done more training out of my own pocket than anything else,” he said. Now, the Air Force is covering that, at least for digital skills. In the future, it will be part of the required onboarding for those entering the newly minted Space Force.

While there are no formal changes yet to promotion criteria, but the Air Force is working on bonuses for learning computer science languages, similar to those it pays for foreign language proficiency. Other incentives to taking the courses include digital patches and awards that Crocker said are aimed to bring more lighthearted and coder-friendly competition to the course work. 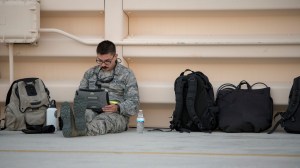