Argonne National Laboratory researchers have used machine learning to rapidly optimize the application of thin films to semiconductors, a move that may eventually help ease the microchip shortage in the U.S.

The researchers spent a couple of months developing machine learning (ML) algorithms and custom software capable of finding the ideal conditions for achieving high, stable film growth in the least time and then refined the scalable process in a two-year project.

Researchers currently perform atomic layer deposition (ALD), the formal name for the process, by placing samples in a chemical reactor and then removing them to take measurements. But Argonne‘s new, closed-loop system can conduct experiments, learn from the results and suggest new experiments all on its own.

“I think that what we have learned from this project, and from other similar projects, is that there is a lot that you can do with machine learning to address problems involving manufacturing,” Angel Yanguas-Gil, a principal materials scientist at Argonne, told FedScoop.

Image and sound processing and text generation and mining still dominate ML projects, but researchers are increasingly applying the technology to others that require domain-specific knowledge and making similar breakthroughs, Yanguas-Gil said.

Argonne’s ALD breakthrough can help manufacturers save time and money creating nanoscale films, as thin as one atom, to electrically insulate components of semiconductor devices, microchips, solar cells and lithium batteries. During ALD two chemical vapors called precursors adhere to a surface inside a chemical reactor to create the film layer.

The Defense Advanced Research Projects Agency‘s Electronics Resurgence Initiative views techniques like ALD and atomic layer etching as foundational to developing leading-edge nodes in the semiconductor industry, which the U.S. wants to do to regain a competitive edge over China in everything from microchips to exascale computers.

Argonne funded its ALD work through its Laboratory Directed Research and Development project, which is focused on accelerating emerging technologies in areas like manufacturing before transferring them to the private sector.

Yuangas-Gil was part of an interdisciplinary team that included ALD and ML experts and was focused on developing leading-edge, super-fast nodes that require more ALD steps to produce and incorporating new materials not part of the standard portfolio. ML can experiment with new materials a hundred times faster in a lab, Yuangas Gil said.

While the global microchip shortage was one “inspiration” behind Argonne’s work, it’s a “longer-term” problem that using ML to optimize ALD won’t alone solve, he added.

Industry has already expressed interest in Argonne’s work, and companies that have the proper tools could replicate the closed-loop, ML system and be testing new capabilities within a week of development.

“The good thing is that everything that we’re doing can be done with commercial equipment,” Yuangas-Gil said. “It’s just a matter of putting it together.” 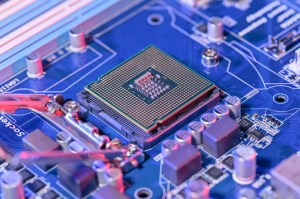