The Army has announced a delay into its signature augmented reality headset program, the Integrated Visual Augmentation System (IVAS).

The $22 billion program was developed in partnership with Microsoft, using the company’s HoloLens technology to build headsets for soldiers. The Army said it needs more time to test the system and the announcement comes after the service conducted an “adversarial electronic warfare and cybersecurity test.” It did not say if the test was the cause of the delay.

The Army lists May of fiscal year 2022 as the next operational test date and says the first unit will be equipped with the system in September of the same year.

“The Army is fully committed to its partnership with Microsoft to advance specific technologies to meet operational requirements and maximize warfighter impact,” the Army said in a statement.

Army leaders had previously pointed to the IVAS program as a shining example of how the Army can quickly acquire new tech outside of the normal acquisition process. It had used Other Transaction Agreements to work with Microsoft on the multi-billion dollar program.

A Microsoft spokesperson said: “We appreciate the close partnership we have with the U.S. Army and look forward to ongoing iteration with IVAS and the Soldiers using it.”

News of the delay was first reported by Janes. 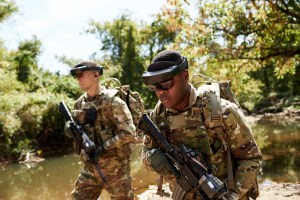