The Army will work to add 3D printing requirements to programming efforts in the coming years that allow objects to be printed in the field, according to the department’s top logistician.

Speaking to reporters Tuesday, the head of Army Materiel Command Gen. Edward Daly said that to capitalize on the IT and other tech modernization priorities, the command wants to start turning research money into procurement dollars — a years-long process that requires approval from Congress.

“We have a strategy and we are inserting those investment requirements into … our programming efforts and eventually the budget over the next five-to-seven years,” he said.

Daly stressed that the building blocks are ready, with the command having the tech to be able to store files that mirror physical objects and can instruct large-scale printers to replicate them.

“The digital thread is in place now,” Daly told the Defense Writers Group. “No matter where you are, whether you are at the tactical edge or in a depot, you can see the required files that you need to 3D-print a part,” Daly said.

Materiel Command maintains the Army’s depots and supplies and is heavily involved in the department’s sprawling supply chains that would support mobilized units in battle. The command is turning to new technologies that include 3D printing, delivery drones and other tech to increase its ability to service troops’ needs.

“I firmly believe that it is these capabilities … that will allow increased velocity,” he said. “At the tactical level, it will increase readiness.”

In addition to making the slow turn on its budget, the command is also working to increase the number of digital designs it hosts within its data systems and the physical equipment needed to make 3D prints. Some of the prints can be as large as concrete buildings. Daly said that the Army Research Lab, which he also oversees, has made major contributions to finding innovative new technologies to use in supply chains.

The command received new attention with its assistance both in the Army’s response to the on-going pandemic and its delivery of personal protective equipment across the country. 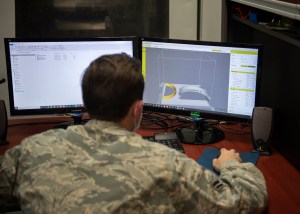