The Army has awarded two Other Transaction Agreements (OTAs) to defense contractors to build training simulators to prepare warfighters for battle around the globe.

One of the awards went to VT MAK, a Massachusetts-based company, for simulation software for the Common Synthetic Environment, the Army’s platform enabler for its training simulator program. The other contract was awarded to Vricon Systems, based in Virginia, for One World Terrain technology which simulates many types of environments soldiers might face.

OTAs are rapid prototype contracts that work in incremental steps instead of one-off terms.

The approximately $95 million value of each contract depends if all options are extended through the OTA framework. The process starts with small, quick-turnaround prototypes that then lead to extensions in the contract and additional funding if the prototypes meet standards. Other defense agencies have found recent success in the decades-old prototype contracts.

The Army’s contracts are a part of its Synthetic Training Environment, the simulator process used to train soldiers in far-flung environments without having to transport them enabled by the Common Synthetic Environment. The Army hopes the project will generate 400 types of location-specific environments for training. The Army is scheduled to deliver initial capabilities by September 2021, according to the contract award.

With a successful prototype, the Army anticipates “a follow-on production effort may be awarded via either contract or transaction, without the use of competitive procedures if the participants in this transaction successfully complete the prototype project as awarded.” 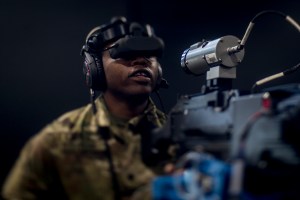