The U.S. Coast Guard is paying very close attention to the Department of Defense’s Joint Enterprise Defense Infrastructure (JEDI) cloud contract as it tries to bring its outdated IT systems back from the “brink of catastrophic failure.”

Commandant Adm. Karl Schultz said the Coast Guard intends “to derive some learning and potentially fall in on” the JEDI contract — the DOD’s $10 billion cloud migration effort that was awarded to Microsoft in October but has since been mired in protests.

The Coast Guard is housed under the Department of Homeland Security — not the DOD — so it wouldn’t be under the umbrella of the JEDI contract.

Shultz has had his eye on JEDI for quite a while now. Back in August 2018, long before the contract was awarded, he expressed interest in the learning from DOD’s action around the commercial cloud.

“You sort of say, ‘What is that next big technological advancement that really changes things, that allows you to find efficiencies?’” he said then, adding that he’d issued a challenge to his senior leadership to come back with an answer to such a question.

The guard released a multi-year modernization road map in February that included delivering a cloud strategy within the next year and migrating to the cloud over the next few years. Schultz recently spoke of the need for a “tech revolution” during a “State of the Guard” event.

“Years of investment tradeoffs have brought our information technology to the brink of catastrophic failure,” he said at the February event.

The Coast Guard’s first priority in that plan is increasing the connectivity of its cutters for the service to continue patrolling the waters of the U.S. and in international waters where information on drug trafficking in critical. Migrating to the cloud and modernizing IT will be a part of achieving that broader goal of increasing connectivity and creating a more “mobile” force, Schultz said Monday during an interview on the virtual edition of the 2020 Sea-Air-Space conference.

More recently, the coronavirus pandemic has provided extra incentive for the guard to modernize. Schultz said the Coast Guard’s need for modernization has been “exacerbated” by the coronavirus as the service, like those in the DOD, has moved rapidly to telework.

“You get the point where you can’t kick it (down the road) any longer,” Schultz said of the guard’s IT infrastructure Monday.

The Coast Guard has been called to respond to the coronavirus pandemic by assisting cruise ships docking in the U.S. with sick passengers aboard and helping to deliver critical supplies.

Recently, the service inked a small deal with Palantir systems for a “Readiness System in Response to COVID-19 Pandemic,” according to a public version of the contract. 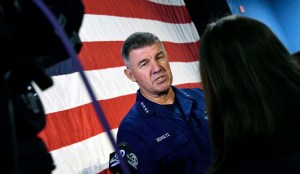 Coast Guard still considering its own JEDI for cloud modernization