While the Department of Defense hopes to award contracts to cloud providers later this year for its enterprisewide Joint Warfighting Cloud Capability (JWCC), the Air Force is planning to continue building out its Cloud One platform as its cloud environment of choice.

“The short story is we’re not waiting, we haven’t waited, we will continue to not wait for anybody else to come and provide us with capability,” Air Force CIO Lauren Knausenberger told FedScoop during an interview for the Let’s Talk About IT podcast when asked about the service’s plans for cloud adoption with JWCC awards looming. “We’re moving forward, we’re moving out, we’re continuing to improve” Cloud One, she added.

Knausenberger detailed the robust cloud platform the Air Force has developed in Cloud One, calling it the “world’s largest cloud instantiation for any commercial or government entity,” in terms of internal business. The Air Force contracted with SAIC to help integrate Cloud One and offer cloud services from Amazon, Google and Microsoft to hundreds of thousands of users across the Department of the Air Force and greater DOD.

The $9 billion JWCC procurement is meant to enable a multi-cloud environment across the DOD enterprise to support Joint All-Domain Command and Control (JADC2) and greater adoption of artificial intelligence, among other things, “at all three security classifications: unclassified, secret and top secret all the way from the continental United States out to the tactical edge,” DOD CIO John Sherman said earlier this year when awards were delayed until December. Amazon, Google, Microsoft and Oracle have been invited to bid for spots on the acquisition, which was created to replace the Joint Enterprise Defense Infrastructure (JEDI) contract after it was canceled due to years of ongoing protests and delays.

Knausenberger hopes JWCC is awarded “soon” and that it’s successful, saying that it “may give us some better pricing on compute” at the very least. “And if it does, we’ll still use our Cloud One as a front door and we will purchase that compute via JWCC,” she told FedScoop.

There’s also the chance that JWCC could be awarded and turn out to be a game-changing capability, in which case Knausenberger said she’d reconsider it as more than just an option for cheaper compute.

“If JWCC comes into the market, and those vendors are able to just rapidly and magically almost spin-up fully accredited environments and just really knock it out of the park for migrations, then we can use it for even more things,” she said.

“And if it can solve the problem of global data sovereignty, where I can just leverage any data center anywhere in the world, and we understand that if that data is so encrypted, or if it’s just a shard of data that is maybe sitting somewhere else in the world … could it really cause, you know, a problem with that data being somewhere other than U.S. soil?” Knausenberger added. “If we can solve that problem with JWCC I will be thrilled. If we can solve that problem, multiple levels of classification, and simplify the process of sending data between levels of classification and make that immensely easier than it is today, with many, many, many, many levels of approval before it actually does work pretty well, on the other end of that work — those are all things that I hope for JWCC.”

In the meantime, the Air Force continues to refine its own Cloud One platform. Knausenberger said the service developed what she called “Race to the Cloud,” an effort meant to eliminate manual processes and make the process for users to get to the cloud more automated.

“We haven’t done a good job of making it really, really easily consumable getting to that push-button, spin-up cloud model that you have effectively on the commercial side,” she said.

“Before I send out that guidance, I want to make sure that when people show up and they want to move to the cloud, that it’s not going to take a really long time, that they can show up, that we can assess their workloads very quickly, very efficiently, that we know exactly what the cost will be, that that is transparent, that we have a solid catalog of things for them to look at,” she said.

Listen to Knausenberger’s full comments on Cloud One, JWCC and much more in her interview on the Let’s Talk About IT podcast. 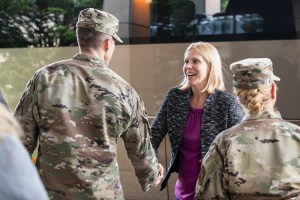