Senior leaders at civic technology nonprofit Code for America have indicated they are open to talks over potential union recognition.

Sources speaking to FedScoop said management responded to a request for dialogue sent by organizers late Friday, which could pave the way for voluntary recognition of the representative group.

In a statement to this publication, a spokesperson said that Code for America is working with staff and organizers from the Office and Professional Employees International Union to understand the process.

“We are continuing to learn more about their efforts and look forward to building upon continued inclusive efforts to ensure that Code for America is a great place to work,” said the statement. “We are also committed to ensuring that our actions are consistent with our legal obligations under the National Labor Relations Act, and that we also respect the rights of all of our employees under the law.”

The California nonprofit was founded in 2009 and works with the federal government and state agencies to improve the design of civic technology. It is currently working on federal government tech projects relating to safety net benefits and earned income tax credits.

Under U.S. labor law, an employer can choose to recognize a union voluntarily, or can insist on a secret-ballot election held by the National Labor Relations Board.

Code for America employees last week revealed plans to unionize with the Office and Professional Employees International Union (OPEIU) Local 1010. So far, 62 people at the organization have signed union authorization cards, which is understood to represent about 77% of its workforce.

One source speaking to this publication described the reception of demands from management as “prompt and optimistic.”

Among the concerns of Code for America staff seeking to unionize are recent plans to adjust the salary of new employees who work remotely away from the organization’s California headquarters. Other concerns include the availability of mental health support and diversity, equity and inclusion measures.

Employees inside the federal government and the wider technology sector have received a boost from the prioritization of rights to collective action under the Biden administration.

As part of its budget proposals, the administration in January proposed a pay raise for employees and said it would encourage union activity and collective bargaining.

A spokesperson for Code for America added that prior to the request for union recognition, the organization had raised salaries across the board by about 10% to 20% and that it continually benchmarks benefits it offers against those of other companies and nonprofit organizations. 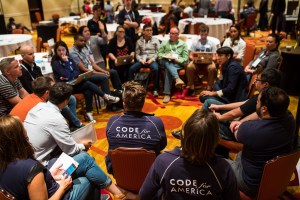