The U.S. Cyber Command is not “optimized” to combat information operations orchestrated by foreign powers, its leader testified Tuesday.

“It right now is not in our defined set of responsibilities per say,”NSA Director and U.S. Cyber Command head Adm. Michael Rogers said during a Senate Armed Services Committee hearing. “I would be the first to admit that [information warfare] is not what our workforce is optimized for … we are certainly not where we need to be.”

During the hearing, Rogers detailed an expansive counter-messaging campaign against ISIS, despite his comments on Cyber Command lacking what it needs to be dominant in information warfare.

Tuesday’s hearing, which was originally organized to discuss the development and maturation of U.S. Cyber Command, comes at a time when Congress is increasingly interested in developing a strategy and finding solutions to counter the information warfare capabilities of hostile nations like Russia.

CyberScoop’s Chris Bing has more on what Adm. Rogers testified during the hearing. 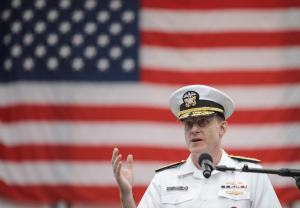