GSA initially awarded the contract to the GDIT-led team in August 2019, which Perspecta protested twice, leading to corrective actions that saw both companies lose out in what the agency said was a “fair, transparent and equitable process.”

“The last six months have put enormous pressure on the department to move faster with cloud adoption,” said DOD Chief Information Officer Dana Deasy in the announcement. “All across the department there are demand signals for enterprise-wide collaboration and ubiquitous access to information.”

DEOS also covers word processing, spreadsheets, file sharing and storage in Microsoft 365 cloud environments at Impact Levels 5 and 6 both nationwide and for overseas garrisons and operations.

“DEOS is a key part of the government’s CloudSmart strategy and will provide a foundation and blueprint from which future civilian cloud efforts can build,” Murphy said. “The new IT Vendor Management Office has been established at GSA to lead these governmentwide initiatives.”

As troublesome as the DEOS award proved, it was not nearly as mired in conflict as DOD’s other major cloud procurement: the $10 billion Joint Enterprise Defense Infrastructure (JEDI) contract. That one would bring commercial cloud infrastructure to the military, but it’s been under protest from Amazon Web Services ever since being awarded to Microsoft last October.

“The need for DEOS capabilities have been further amplified by the COVID-19 crisis, which has forced agencies to leverage other short-term solutions to support their remote workforces,” said a GDIT spokesperson. “More than ever, it’s imperative that we accelerate the deployment of technology to support our mission partners.” 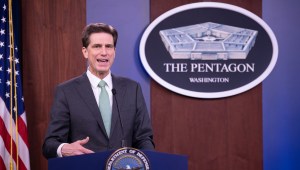