The Department of Veterans Affairs is set to delay all future scheduled deployments of the Oracle Cerner electronic health record system at VA hospitals until June 2023.

In a statement announcing the delay Thursday, the department said it was pushing back the rollout to “address challenges with the system and make sure it is functioning optimally for veterans and for VA health care personnel.”

The decision comes after VA Secretary Denis McDonough in July announced that the department would delay certain EHR deployments until at least January 2023 to ensure that all issues with the system are resolved before a wider rollout.

Details of the delay were first reported by The Spokesman-Review newspaper.

According to the VA, a subsequent investigation at the five hospital locations where the system is deployed identified a range of additional technical and system issues including “challenges with performance, such as latency and slowness, problems with patient scheduling, referrals, medication management and other types of medical orders.”

The Oracle Cerner EHR is currently deployed at VA facilities at Spokane and Walla Walla in Washington State, Roseburg and White City in Portland and Columbus in Ohio.

News of the delay follows a litany of reported problems with the system, including latency issues and outages.

Last week, FedScoop revealed the latest of such problems, which government sources said left EHR pharmacy services unavailable for outpatients during much of the day on Oct. 8.

Concerns over the impact of the system on patient care have been expressed by frontline medical staff, lawmakers and oversight bodies. Earlier this year, the VA’s Office of Inspector General published a trio of reports that identified major concerns about care coordination, ticketing and medication management associated with the EHR program launch.

Commenting on the decision to push back all future EHR deployments, Deputy Secretary of Veterans Affairs Donald Remy said: “Right now, the Oracle Cerner electronic health record system is not delivering for Veterans or VA health care providers — and we are holding Oracle Cerner and ourselves accountable to get this right.”

He added: “We are delaying all future deployments of the new EHR while we fully assess performance and address every concern. Veterans and clinicians deserve a seamless, modernized health record system, and we will not rest until they get it.”

In an internal note announcing the rollout delay obtained by FedScoop, VA Under Secretary for Health Shereef Elnahal said: “Over the coming months, we will implement an “assess and address” period to correct outstanding issues with the new system – especially those that may have patient safety implications – before restarting deployments at other VA medical centers. This decision is a continuation of Secretary Denis McDonough announcement in July, when he said that we would delay EHR deployments to ensure that the system’s issues have been resolved.”

“For those of you working at our EHR sites, thank you for your unwavering support in ensuring the best systems are in place for Veterans. I had a chance to meet many of you at the Columbus VA Medical Center only weeks ago, to learn about some of these issues firsthand. The team there is extraordinary and wants to get this right. And that’s exactly what we’re going to do: get this right for the facilities already using the new EHR, and for all future deployments.

He added: “VA remains committed to building an EHR solution that will link with the Department of Defense’s health record system to create a lifetime of seamless care for service members and Veterans. That end goal is achievable if we take these necessary steps forward.”

Editor’s note: This article was updated to include details of the VA Under Secretary’s internal note. 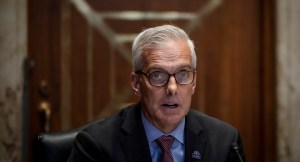