Department of Homeland Security Deputy CTO Rob Palmer is leaving this week, after more than eight years of federal service, FedScoop has learned.

His last day will be Oct. 28, he confirmed. He told FedScoop he will be joining a new cybersecurity services firm, ShorePoint, adding he would have more to share about those plans when it launches next month.

Palmer, who began his federal career as a contractor for the Transportation Security Administration in 2008, became a federal employee in June 2009. He had previously done consulting and program management work for the U.S. Army and the Pentagon’s Missile Defense Agency.

Three years later, in June 2012, he moved to DHS as information assurance chief for the department’s Enterprise System Development Office, then headed by Kieth Trippie. Within less than two years, he was acting executive director of EDSO, the team in the CIO’s office that buys cloud and other departmentwide IT services for DHS. In April 2016, he was appointed deputy CTO and became a member of the Senior Executive Service.

The CTO function in DHS is to drive innovation and integration across the whole department, and Palmer has made mobile adoption one of his signature issues. 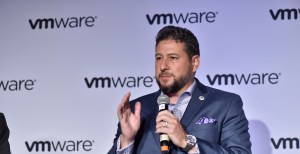