John Zangardi knows cybersecurity is the emerging battle of the 21st century, and chief among his concerns is how to hire the experts needed to fight it.

The Department of Homeland Security CIO said Friday that given the increasing importance of securing cyber and IT talent to the agency’s mission, the federal hiring process desperately has to become more flexible to be competitive with the private sector.

“I am competing with you on salary, and I’m competing with you guys on quality of life, while not having an easier hiring process. But the thing I am really competing on — and this is where I think I beat you guys — is service to the nation and mission,” he said Friday at a Federal Insights Exchange Session hosted by ACT-IAC. “I’ve heard that a lot from my buddies in industry, that they just don’t get that job satisfaction. Job satisfaction is where I can win, but it doesn’t always win is the salary differential is really high.”

DHS is in the midst of a multi-pronged modernization strategy that involves projects like leveraging the Enterprise Infrastructure Solutions contract for network upgrades and telecommunication replacements, data center and security operation center consolidations, and other enhancements, all of which will require increasing numbers of IT professionals to drive progress.

Zangardi said because technology talent is critical to DHS’s plans for both cybersecurity and IT modernization, his 2019 budget includes “cyber pay” compensation increases to help narrow the skills gap across the department and to retain the talent it currently has to the private sector or other agencies.

“That will help me compete a little bit better within the broader cyber community to hold onto people,” he said. “Right now, I kind of hire them, I kind of train them and I kind of lose them because I can’t pay them as someone else in the government can.”

But even with compensation incentives, the CIO said challenges in the hiring process continue to make securing new talent a high bar to overcome, including a security clearance processing backlog that Zangardi estimated was stretching to 800,000 applications and has dammed the personnel pipeline for workforce development and contracting opportunities.

“I can bring on someone pretty quickly with an interim secret clearance, but that [Top Secret / Sensitive Compartmented Information clearance] is a bigger hurdle,” he said. “I know don’t know how long it will last, I know people are focused on making it better. We need to make it better, not only for industry, but for us.”

To that end, Zangardi said the federal hiring process is long due for an upgrade, and DHS Chief Human Capital Officer Angie Bailey has been collaborating with the CIO’s office on strategies to infuse the department with new talent, including internship programs and a personnel system for cyber professionals.

“We want to be more strategic,” he said. “We want to have dynamic career paths. There’s no reason to be tracking along these things, but, you know, we have all of these codes and things. This is all about getting things done. This is more about outcomes rather than checking a block [and saying], ‘Hey, you’ve been here 12 years, you get a raise.’”

But to shape these changes, Zangardi pointed to the collaboration with Bailey and the human capital office, saying it was essential for both offices to have buy-in if they plan to address the technology headwinds facing them.

“We are really trying to be more innovative,” he said. “And our personnel folks are taking the lead. It’s not me as CIO. That’s a key thing, if your HR folks are on-board and recognize this is important, that’s a good thing. I’m not fighting her. She’s probably pushing me more than I’m pushing her and that’s good.” 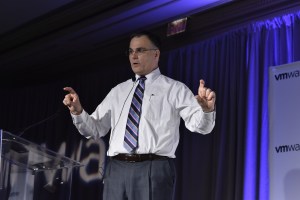