The Department of Defense’s oversight body has warned military personnel they must wipe sensitive health and medical data from technology being returned as part of the U.S. withdrawal from Afghanistan.

In a report, the Inspector General (IG) reiterated rules that state all personally identifiable information must be removed from equipment including medical equipment, laptops and cell phones.

According to the IG, this is crucial both to prevent civilian and military records such as health and service records from falling into the wrong hands. The oversight body said also that officers must keep accurate records of technology that is returned as part of the withdrawal process.

In prior audits of military base equipment in Afghanistan, the IG found that the protocol for clearing information from equipment was not always being followed. In one case a device used to protect soldiers from improvised explosive devices was left showing sensitive location data.

“Unless equipment is properly processed by unit personnel before turning it into redistribution property assistance team personnel, there is a risk of theft and compromise of sensitive information,” the report said.

In May, DOD officials acknowledged that some U.S. military equipment could end up in the hands of Taliban fighters, but said military planners were using the time left until the pullout is complete to minimize the threat.

In February last year, the U.S. and the Taliban signed a conditional agreement to remove all U.S. forces from Afghanistan by April 2021. The military mission is set to conclude on August 31. 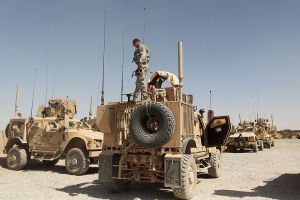