The Department of Defense wants to give defense-curious startups a safe space to pursue capital without having to look into funding from foreign investors that might have adversarial ties.

On Wednesday, Pentagon officials announced the launch of the Trusted Capital Digital Marketplace to give growing companies more avenues to work with DOD while ensuring they do not take foreign investments that might preclude them from working as a defense contractor in the future. The marketplace finalizes pilot work started in 2019 at the behest of that year’s National Defense Authorization Act.

The DOD kicked off the full program in December, with acquisition leaders taking to the Pentagon Briefing Room this week to promote its launch after a break for the holidays.

“We are really hoping to diversify the defense industrial base,” said Ellen Lord, undersecretary for acquisition and sustainment. Lord said the DOD hopes that non-traditional and dual-use companies will sign up for the program, calling it a “speed dating app” to connect companies in the national security world with investors.

The way it works is that both growing companies (“capability providers”) and investors (“capital providers”) apply to join the marketplace and be screened by DOD. If accepted, they are listed in the digital marketplace as trusted receivers and sources of funds and have the ability to connect with each other. So far 128 companies have “logged into the system” along with 30 capital providers, Katie Arrington, DOD’s chief information security officer for acquisition and sustainment, said during the briefing.

The DOD credits new laws for helping put the marketplace together, including the Tax Cuts and Jobs Act of 2017, which created new designations for special national security-related companies in the tax code. The fiscal 2021 National Defense Authorization Act also references the program and further propelled the department to bring it to life, as it requires a report on efforts to expand the initial pilot program.

The move to support trusted capital comes after several warnings from Lord that the coronavirus pandemic has accelerated “adversarial investment,” where hostile countries look to invest in American companies to purposefully disqualify them from future security clearances and DOD contracts. Lord cited dozens of recent mergers and acquisitions of Chinese companies and billions of dollars in investments that came from the country as reasons to move forward with the marketplace.

“We recognize that this supply chain diversity comes with some risk,” Lord said. “COVID-19 magnified that risk.”

The launch of the program is likely one of the last initiatives Lord will oversee as undersecretary for acquisition and sustainment, as she will resign from the politically appointed role when the Biden administration takes office next week. Wednesday, she said the press briefing would “likely” be her last with the department. 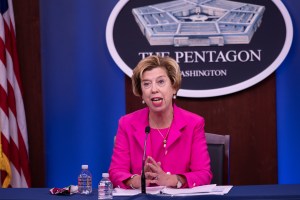