The Department of Defense plans to keep many parts of its recently enhanced teleworking capabilities in place for the long-term, hoping to use the response to the coronavirus pandemic as a springboard for a more digitally connected and telework-ready military.

DOD CIO Dana Deasy said Monday during a press briefing at the Pentagon that teleworking capabilities — such as expanded bandwidth and network access and additional devices in the hands of the workforce — are booming.

Each of the services has seen — or soon expects to see — triple-digit percent increases in teleworking capabilities in recent weeks. The Army has experienced a 400 percent increase in network access for remote capabilities, while the Air Force has taken measured to increase its bandwidth by 130 percent, Deasy said. The Navy hopes to double its number of remote-workers from 250,000 to 500,000 soon.

Much of that will remain in place beyond the pandemic, Deasy added.

“The way we work has changed dramatically,” he said, adding later that “There is going to be an enhanced teleworking capability that will be sustained at the end of COVID-19.”

DOD’s expanded network access is a product of a Deasy-led task force that meets for two hours daily to work through technical issues across the military. When the DOD first went remote in March, it put “unprecedented strain” on its networks, causing the department to cut access to streaming services to lighten the load.

Much of the IT transformation the DOD is delivering usually takes months or years to plan and implement. Instead, it has been compressed into weeks and days to meet the challenges brought on by the coronavirus, said Lt. Gen. Bradford Shwedo, CIO for the Joint Chiefs of Staff who also spoke at the briefing.

“It is a different type of war, but it is war none the less,” Shwedo said of the DOD response to the pandemic.

Deasy pointed to an example of the DOD’s speed in launching the Commercial Virtual Remote (CVR) Environment, a cloud platform based on Microsoft’s Teams collaboration tool that is adding hundreds of thousands of DOD users each day.

Similarly, the DOD is rapidly building out new IT capabilities to help local coronavirus response efforts, Deasy said. The department launched a 1Gb broadband network in New Orleans to support the National Guard, field hospitals and first responder communications in just one day.

While some parts of DOD’s teleworking enhancements will stay in place long-term, the CVR likely will not, Deasy said. The task force is currently working on a plan for how long it will stay in place and how to keep its data retained securely and in compliance with federal regulations.

What will remain, however, are the additional virtual private networks (VPNs), devices and network connectivity options that the department has acquired while responding to the pandemic, Deasy said. 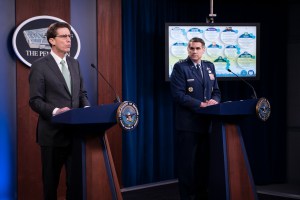 DOD’s enhanced IT, teleworking capabilities are here to stay