Energy Secretary Rick Perry has become a cheerleader for the government’s use of artificial intelligence, and now he has a single office to oversee the department’s efforts with the developing technology.

The new DOE Artificial Intelligence and Technology Office (AITO), announced Friday, will serve as a “coordinating hub for the work being done across the DOE enterprise in Artificial Intelligence,” a press release states. The vision is to “transform DOE into a world-leading AI enterprise,” but there are few details about the office available beyond that.

The rationale seems to be that the development of AI requires computing power, and DOE, with its National Laboratories system and abundant supercomputing resources, has that in spades.

“The world is in the midst of the Golden Age of AI, and DOE’s world class scientific and computing capabilities will be critical to securing America’s dominance in this field,” Secretary Perry said in a statement. The office is new, he added, but it’s work will be focused on supporting existing department projects.

The office currently has a staff of nine detailees from around the agency, a source told FedScoop, and it expects to staff up further as resources become available. The office reports to DOE Undersecretary for Science Paul Dabbar.

DOE cites President Trump’s American AI Initiative as the impetus for the establishment of the office. Indeed, AI has been a big focus of the administration’s tech policy in the past year — the technology even has its own page on Whitehouse.gov. This coming Monday, the Office of Science and Technology Policy plans to host a summit on the use of AI in government. 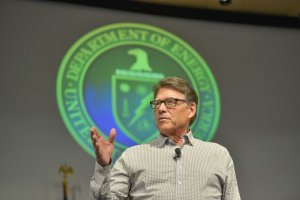